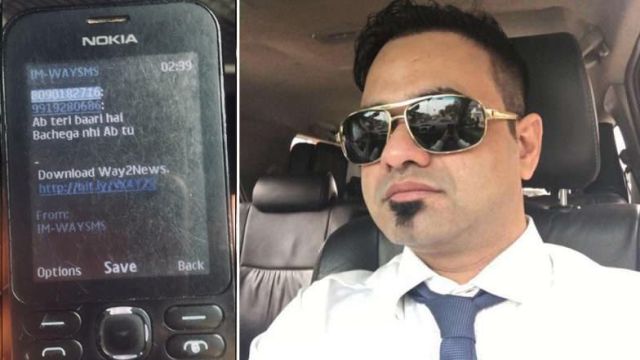 New Delhi: “I am not going to bend an inch. I’ll speak my heart”. These are the words Kafeel Khan -the doctor who was suspended from BRD Medical College in Gorakhpur last year- wrote on his Face book timeline after he received death threats through SMS on his mobile phone.

The message sent to him read, ‘It is your turn now. You cannot escape’. He received the threat day after Umar Khalid, the JNU student was targeted by an unidentified gunman near Constitution club.

Khalid was there to attend a conference “Khauf Se Azaadi” organised by United Against Hate. He said, the attack was planned to “scare us into silence’’.

Coincidently, Khan was also participating in the same conference on the day. He spoke there on a range of issues including his one year long suspension, his persecution in jail, the government stands against triple talaq and Polygamy. He asked the audience not to live in fear. “Till you are in fear, you will be persecuted and this is exactly what happened with me” he said in his speech.

After receiving death threat from an unidentified number, Khan has asked Shalabh Mathur, the senior superintendent of Police (SSP) in Gorakhpur to investigate the matter. “He (SSP) said, I will investigate this” Khan added. In his letter to Mathur, he has also requested to arrest the attackers of his younger brother Jameel. Despite repeated attempts Mathur didn’t respond to Muslim Mirror correspondent. His personal assistant told he was ‘busy’ in a meeting.

Khan and his family have been targeted earlier on more than one occasion. His younger brother Kashif Jameel was attacked on June 10, 2018 by unidentified gunmen. But “the police has arrested no culprits by now” Khan said.

Dr. Kafeel Khan was in news after he was charged of being involved in children’s death in BRD Medical College, Gorakhpur. He was suspended and jailed for the same in October 2017. After eight months, Allahabaad High Court released him on bail as it did find evidence enough to prove him guilty. Khan has been reiterating that he was not responsible for the deaths rather he had rescued many children by his own efforts.