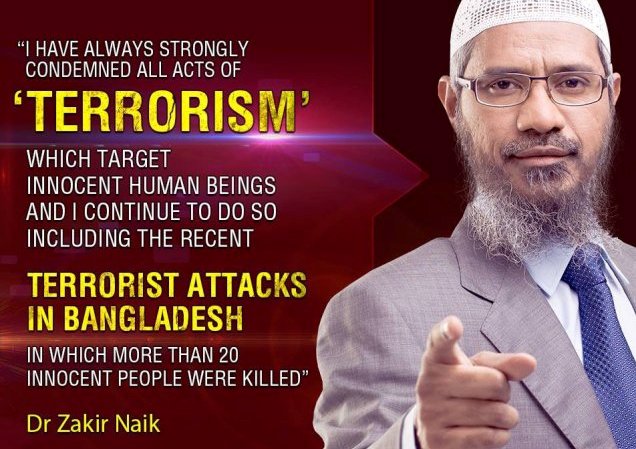 Dr Zakir Nayak inspired two terrorists who killed 20 people in a posh hotel of Dhaka on June 24 is the latest chicanery of a section of Indian media.  While the Bangladeshis authorities and Dhaka-based Daily Star publicly pronounced that it did not attribute the Cafe- attack to Dr Naik. In spite of this fact, the continued  orchestrated vilification campaign by the saffron-influenced media and supported by communal forces against the world-renowned Islamic scholar and preacher is meant to tarnish the image of Islam as Dr Naik has become the biggest stumbling block in their scheme of  hate by spreading falsehoods about Islam, and Muslims as well as  their fear about  the religious awakening in Hindu brethren as Dr Naik extensively quotes from the Hindu holy scriptures in his speeches.

In any conference where Dr Naik spoke, at the end of his talk, Q&A session is held in which he answers the queries from the audience and among the audience few reverted to the Islamic faith after getting convinced with their quieries.The reversion or conversion was telecast live which was not at all liked by the people who feared Islam’s message of truth and equality. His talk not only inspired commoners but intellectuals, professionals like engineer, doctors, and other faith preachers as well who at times converted to Islam. He is not a ‘Dharma guru’ in any sense as Islam does not allow any clergy or ecclesiastic system.

Dr Naik is an expert on comparative religion and has had dialogue with many Christian evangelists and Hindu Gurus like Shri Ravi Shankar of Art of Living. He points out the similarities of different religions and tried to show how different religions point towards oneness of God. Not a single of his talk gives impression even in remote sense that he preaches hate or talks against humanity.

On being asked once about the terrorists, he has never defended the terrorists rather he openly says that there are black ships in the community as in any other community.

Rather Dr Nayak has thrown open the facts of different religion which was deliberately kept under the carpet by the contractors of religions. Many Hindus, I have come across, say that they were unaware of their own religion unless they watched Dr Nayak lectures. These Hindus started questioning the Hindu gurus and to their parents about many myths which were sold to them as religious obligation in their ignorant years.

It is clearly the frustration of these groups of people who long wanted to suppress the voice of Dr Zakir who everyday appeared on TV channels especially his peace TV to challenge the myths spread by the vested interests.

Now that government has instituted an inquiry into the contents of his speeches, the truth will soon come out but let us hope that context of his speeches should be kept in mind for a fair treatment to all his speeches.

Dr. Zakir Naik: From a liberal Muslim to Islamist