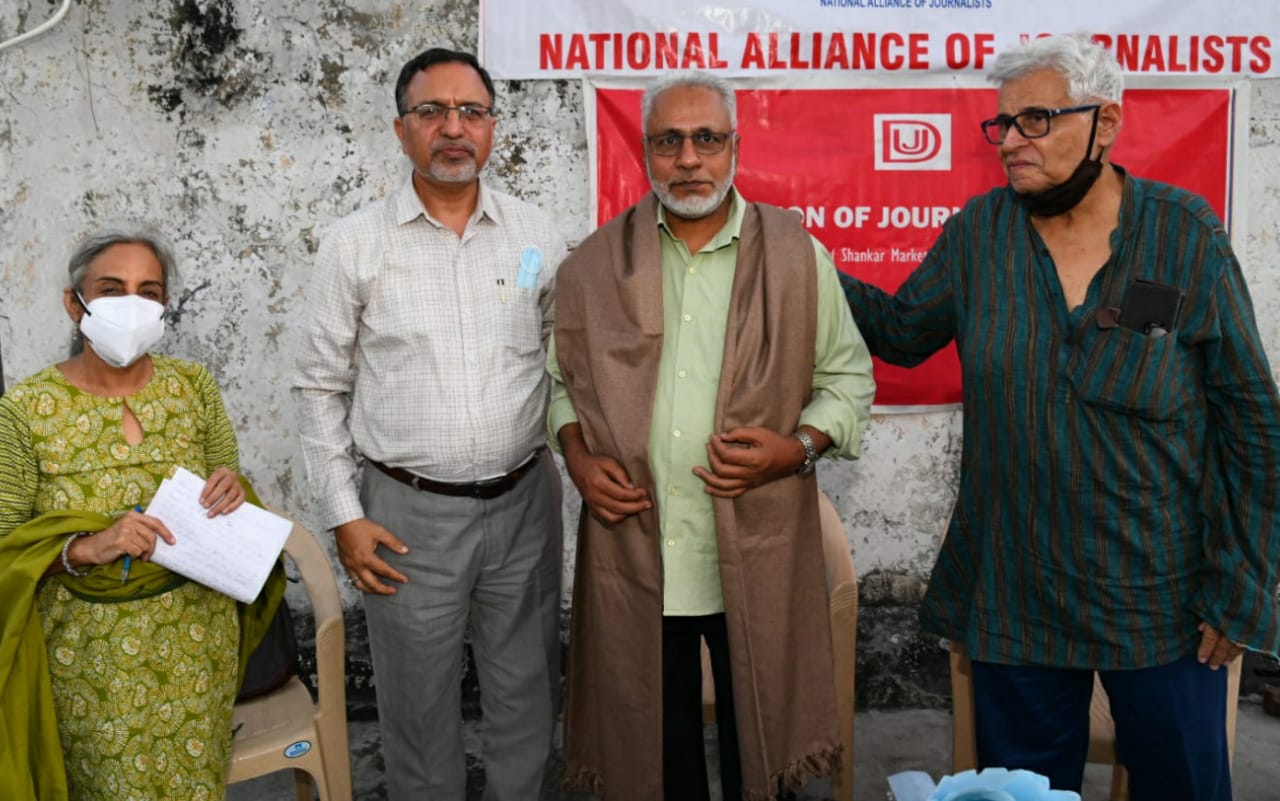 New Delhi: The Delhi Union of Journalists (DUJ) felicitated veteran journalist Masoom Moradabadi at a ceremony to congratulate him on the release of his latest book . Moradabadi’s well researched work documents the 1857 revolt against the British and the pioneering role played by the Urdu press in that freedom struggle.

Welcoming Moradabadi, DUJ President S.K. Pande recalled his 40-year association with the DUJ and the role he played in helping to organise Urdu journalists against their economic exploitation. Moradabadi, he pointed out, had risen from the ranks to become an editor. This was recognition of his hard work and exceptional talents. He also recalled that Moradabadi had regularly participated and spoken at the DUJ’s annual anti-communalism event “Sadbhavna ke Rang”, alongside distinguished journalist-poets like Manglesh Dabral among others.

Masoom Moradabadi thanked Pande and recalled his early association with the DUJ since the days when the late journalist and dedicated trade unionist Mohd. Ikram first brought him to the DUJ office and enrolled him as a member. He said he wrote the book to highlight the little known role of the Urdu press in the first freedom struggle at a time when there were scarcely any Hindi newspapers. He recalled the martyrdom of the journalist Maulvi Mohammad Baqar at the hands of the British. Bahadurshah Zafar’s grandson, who published a newspaper, was also killed. During that time 17 editors of newspapers were jailed, one after the other. One would be sent to jail, another would take over the publication and he too would land in jail. Such was the spirit of the times.

Moradabadi said even today the media is being hounded through Enforcement Directorate and income Tax raids and court cases. He referred to the recent raids on Newsclick and Newslaundry. He said those who are scared of the pen are cowards. Lamenting the attack on our composite culture, he underlined that Urdu is a common language, not exclusive to Muslims. He said even today some Urdu papers are owned by Hindus. History has many lessons for those who choose to divide us, he said, citing examples. He pointed out that dargahs of saints are visited by both Hindus and Muslims. Religion should make one an “insaan” not “haiwaan” (a human being, not a devil) he said. It should bring out the best in people, just as journalism should bring out the best in us. “Go sell pakoras, if you do not have the courage to be a journalist,” he told those present.

DUJ Treasurer Mrinal Vallari said the fact that the book “1857 ki Kranti aur Urdu Patrakarita” has been published in Hindi will increase its outreach to an audience unfamiliar with this aspect of history. The book highlights the extraordinary role of journalists in the early freedom movement. It pays tribute to the first journalist martyr in India, Maulvi Mohammad Baqar, who was killed by the British in 1857. Vallari pointed out that journalists have always had a major role in the fight for freedom, with leaders like Mahatma Gandhi, Jawaharlal Nehru and B.R. Ambedkar writing extensively to spread their ideas and inspire people to overthrow the imperial power. Journalists continue to fight for freedom and democracy today she said, citing the example of photojournalist Danish Siddique who covered several movements and struggles in India before he was killed in Afghanistan.

Javed Akhtar hailed Moradabadi as an old friend and colleague, known for his deep research; hard work and professionalism that have helped him reach the top.

Govind Jha said few know that the Imambara in Delhi was built as a gathering place for Hindus and Muslims to meet and make common cause. He lauded the role of both Urdu and Hindi journalism in the freedom struggle.

Mohd. Kazmi congratulated Moradabadi on having published yet another research work. He acknowledged his extensive writings over the years on the Ganga-Jamuni tehzeeb that reflects the country’s syncretic culture, as well as the role Muslims played in fighting for and winning freedom.

S.K. Pande read out messages from veteran journalists, Shahid Siddique and Abdul Wadood Sajid congratulating the author and regretting that they were unable to attend the event. In time honoured tradition the author was honoured with a bouquet and a shawl.

The meeting, on Saturday evening was preceded by stock taking meeting of the Executive and National Council members to review the current situation, attacks on the media and called upon the Delhi labour authorities and the Delhi government to desist from implementing the anti labour codes which should go lock stock and barrel. The plight of journalists in Covid times and non-implementation of wage Awards in Delhi and neighbourhood in particular was castigated. Fast track courts for implementation within three months were demanded.