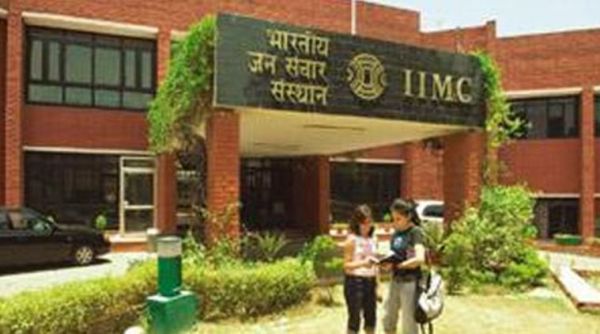 New Delhi: Despite being country’s premier institute for studying Journalism and mass communication, very few students in the past several years have enrolled in the Urdu Journalism program run by Indian Institute of Mass Communication (IIMC). This year, only six students have come to register for the program, which has a capacity of 15 students.

According to Professor Hemant Joshi, the program coordinator, 11 candidates applied for P.G diploma in Urdu Journalism, six of whom appeared in the interview and they all were selected. Similarly, other two programs of regional languages also saw less enrollment of students. P.G Diploma in Marathi and Malyalam Journalism has capacity of 15 students respectively but there are 12 selected students for both the respective courses as 1st & 2nd lists of final selection suggest. However, it is pertinent to mention that the Marathi and Malyalam Journalism programs were introduced from the academic year 2017-18 only.
http://www.iimc.nic.in/WhatsNews_Description.aspx?News_id=40469

The Urdu Journalism program has been attracting least students than all other courses in IIMC. The number of students applying for the course has been lesser than its full capacity prior to this year also. Ghulam Jilani, an alumnus of the previous batch 2017-18 said that only five students completed the program this year.

The annual report 2016-17 mentions that six students completed the same program that specific year. According to Suhail Akhtar another alumnus, eight students got the degree of the Urdu Journalism program in the year 2015.

Having observed the past performance of the course, Rahmat Kalim, ex-student says, “In no academic year till now all the seats have been occupied.’’ He believes that most Urdu knowing people are not aware that such a good course is available at a low amount of fee (Rs.43,000). Prof. Shehpar Rasool, Head of the Urdu Department at Jamia Millia Islamia also expressed the same opinion. “This (program) is not advertized in a way it should be. How do we know that such a course is organized there?” he asked.

On being asked about not advertizing the program, Prof. Joshi, the program coordinator replied, “We usually give ads in Urdu newspapers and now we will advertize it in Urdu schools;” Urdu departments of various institutes also.

The Urdu Journalism program was upgraded to P.G Diploma from the academic session 2016-17. Earlier, it was functioning as a five months course in Urdu Journalism. Now this one year diploma is a comprehensive program wherein relevant practical and theory subjects are taught which include print Media, Camera, Radio, Public Relations, New Media and Development Journalism.

Some of the alumni members stated that the biggest drawback of the program has been that students of the course get placed with meager salaries. According to Ghulam Jilani, many media organizations come to hire at IIMC campus for English and Hindi news channels/ newspapers but the same happens rarely for the students of Urdu Journalism.

Suhail Akhtar complains that no Urdu newspaper or channel came to the campus when he completed his course in 2015 along with his eight fellows. As a result, most of his classmates are no longer associated with the field of journalism and they are either enrolled in higher education, or have started doing other jobs.

Another student Syed Fazil Ahmed said that Etv Bharat was the only channel to hire Urdu Journalism students from the campus in the year 2016-17. It selected four students out of all six there and offered a meager monthly salary of Rs. 16,000 for joining its Hyderabad office. Only two students joined the office in Hydrabaad. Ahmed ascertained that three of his six classmates are in the field of journalism while he and his batch mate Mohd Tasleem are still struggling to get job in a media house. Ghulam Jilani added that the same television company was the one to visit IIMC campus next year and offered the same deal after interviewing and selecting three Urdu students. All the three joined the office in Hydrabaad and the rest two are still struggling to get a job.

According to Suhail Akhtar, rarely, they invite experts from Urdu Journalism field to train the Urdu students. So, they loose an opportunity to build contacts with the Urdu industry people and this leads them to suffer finding a good job.

Many students of the previous batch alleged that two/three classes were attended by Urdu experts every week and for rest of the classes they would sit in the classes of Hindi Journalism. But in his conversation to the wire Prof. Joshi rubbished this allegation. He said, “a separate class of Urdu Journalism is organized from 2 p.m to 5 p.m everyday” however, he agreed upon that their classes are common in morning only. While conforming to the same allegation, Dr. Suresh said, “The Department will operate full-fledged when students will come to study here. With such numbers we have no choice but to run the Hindi and Urdu programs simultaneously”, he added.

The Urdu Journalism program charge Rs. 43,000 as its annual fee but some students find this amount too high and so they do not get into it. Yasir Suhail, a student who is pursuing M.A (Urdu) in Jamia Millia Islamia complained, “I wanted to take admission in this program but I did not apply for it when I saw the amount of its fee.”

Agreeing that course fee comes as an obstacle in enrollment, Director Suresh told that he has requested the ministry of minority affairs to support these students and it has assured to provide them financial assistance.

The move however may not be on cards as there has been a drastic fall in payment of scholarship schemes meant for the minority students as revealed in a recent Wire report.

The other two courses which saw less-enrollment too are taught at Kottayam and Amaravati regional campuses of IIMC and they have distinct reasons for fall in number of their students. Commenting on the fewer enrollment in Malayalam Journalism program Anil Kumar, the regional director of IIMC Kottayam campus explained, “The problem was that the public service commission of Kerala had fixed the date of selection for constable posts on the day of entrance examination. Around seven lakh people applied for it. So, many of those who applied (our course) could not come (for entrance examination as they appeared in tests for constable position).

When Nadim Khan, the regional director of Amaravati campus was contacted, he refused to comment on less-admission in Marathi Journalism program. He asked this correspondent to discuss it with the IIMC Director General Suresh. When Suresh was asked, he said, “The students in these courses are not as few as it is in Urdu.” Further he said that some seats are reserved for SC/ST students. 4 seats are reserved for SC/ST/OBC out of 15. In case, the reserved category students do not fill their seats, they will not get converted into General category as per the Supreme Court order.

During his telephonic conversation with the Wire, Suresh told that he will be launching a similar P.G Diploma program in Urdu Journalism in Jammu also. He said, “A number of people in Srinagar read Urdu and this is their medium of instruction also. So, there is more scope for it there.” Over and above, a regional campus of IIMC is located in Jammu where P.G Diploma program in English Journalism is offered.

Important info has been taken from the IIMC prospectus 2018-19. So, here is the link to it http://www.dnaindia.com/academy/report-iimc-introduces-a-pg-diploma-course-in-urdu-journalism-2293537