Wahida Ahmed watches as another fellow artist has an encounter with the brush at the event “An evening with art and creating the next” held in Guwahati on Sunday.

Guwahati , 5 Nov: The event “An evening with art and creating the next” was hosted at a city hotel on Sunday to mark the completion of ten years of Easel Art Foundation which is headquartered in Guwahati and has to its credit the facilitation of exposure to the highest number of artists from North East India to the national and international art scene. Easel Art Foundation has so far showcased the art work of Ankan Dutta (Assam), Chaoba Thiyam (Manipur), Kompi Riba (Arunachal Pradesh), Mrinmoy Debbarma (Tripura),, Sisir Thapa (Sikkim), Thlana Bazik (Mizoram), Treiborlang Lyngdoh Mawlong (Meghalaya) and many others at various levels within the country and outside.

Wahida Ahmed, the founder of Easel Art Foundation, was born in Sivasagar in Assam in 1975. She studied fine arts at the Guwahati Artists Guild and soon thereafter did three solo exhibitions which were held at the Jehangir Art Gallery, and State Art Gallery, Rabindra Bhawan, Guwahati. There has been no looking back ever since then. She participated at the India Art Summit at Pragati Maidan, New Delhi in 2009 and 2011, followed by participation at the Rotterdam Art Festival, Holland. In recent years she has taken part in art events held in Dubai, Turkey, Indonesia, Vietnam and Croatia representing the country. 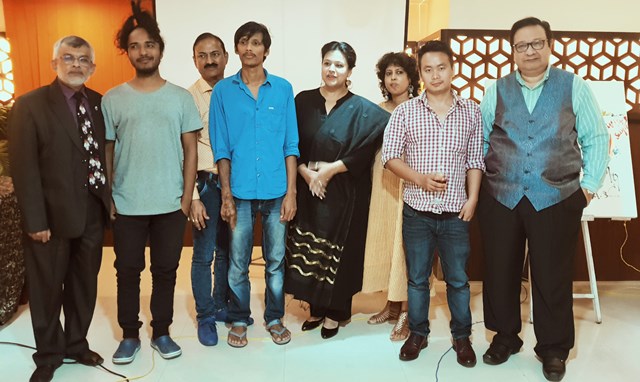 Acclaimed artist Wahida Ahmed (4th from R) at the event “An evening with art and creating the next” held in Guwahati on Sunday.

Easel Gallery was established by her in the year 2008 in Guwahati to provide a platform the artist fraternity of the region to showcase their talent to a bigger audience. Easel Art Foundation was launched in 2015 as a part of Easel Gallery to further provide an avenue for exciting synthesis of the contemporary and traditional arts. Addressing the media persons and connoisseurs of art present at the anniversary event, Wahida said, “The Foundation intends to support, promote, and create platforms for innovation and creativity exploring the areas of ecology, pedagogy, art, culture, and community in the social and cultural context of the region.”

Her latest art project “Blurred Perimeters” which was launched at Kaziranga in Assam in March 2018 has taken the art world by a storm. Under this project, 12 eminent artists of India converged at Kaziranga and held workshops to create awareness about art among the rural children of the area. Under the same project, an exhibition by the same name is now going on in New Delhi and it will conclude on November 10, 2018. The exhibition, which is receiving huge footfalls, is supported by Raza Foundation and hosted by India International Centre, New Delhi.