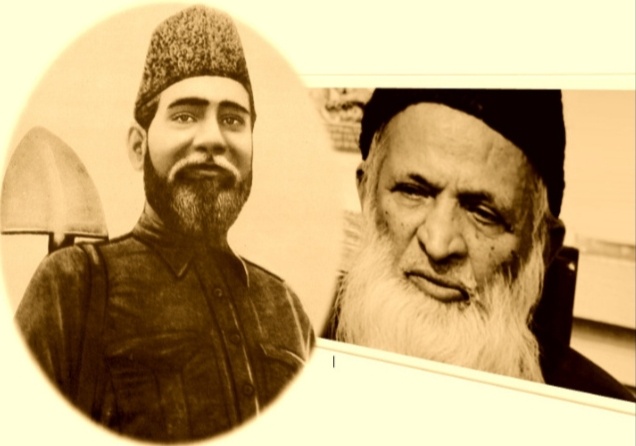 Legendary philanthropist and social worker Abdul Sattar Edhi (1928-2016) was born in the small village of Bantva, Gujrat (North of Mumbai) in British India. After partition, Edhi moved to Pakistan and later started the Edhi Foundation, which runs a large humanitarian network in the country. Edhi has earned many awards for his work. Edhi was profoundly inspired by Inayatullah Khan (famously known as Allama Mashriqi) and his doctrine of community service to people of all faiths. This piece reflects Mashriqi’s deep influence on Edhi.

Before we discuss Edhi, let me first share a bit more about Mashriqi’s work, to help provide an understanding of how Edhi was influenced by Mashriqi. One of Allama Mashriqi’s primary missions was to unite the human race through public service. Based on this ideology, Mashriqi made daily social service (regardless of religion, caste, gender, color or creed), an integral part of his Khaksar Tehrik (Movement), which he founded in 1930. The Khaksar Tehrik’s humanitarian and community service work included helping ailing Muslims, Hindus, Sikhs, Christians and others (including those injured in road accidents), taking them to the doctor, serving widows and orphans, repairing houses for the poor, taking care of unclaimed corpses, and performing various public services, including extinguishing fires, cleaning filthy streets, clearing standing water, filling pot holes, opening clogged drains, and constructing drainage systems and water channels. The Khaksars also played an important role during national emergencies and natural disasters by providing assistance during cyclones, floods, and earthquakes. For example, the Khaksars provided community service to earthquake victims in Quetta in 1935 and also helped people during the deadly Bengal famine in the early 1940s. According to The Pakistan Review (published in 1967), “During the great man-made Bengal Famine (1942-43) in which no less than 5 million people perished, Allama Mashriqi despatched [dispatched] five thousand Khaksars there to help relieve the dire suffering and privations of [Muslim and non-Muslim] Bengalees.” The Khaksars not only rehabilitated and provided shelter to the destitute, but saved the lives of thousands. For example, in Rangoon, they provided rehabilitation to victims of fire. Similarly, during the 1939 Shia-Sunni sectarian clashes in Lucknow (U.P.), the Khaksars forcibly stopped violence and bloodshed in order to help the people. And during the 1947 communal violence (at the time of partition), the Khaksars remained at the forefront, preventing killings, rapes, abductions and saving countless lives of Muslims, Hindus, Sikhs and people from other religions. The Khaksars performed these services with great personal risk and sacrifice, often having to travel long distances in service of the poor. 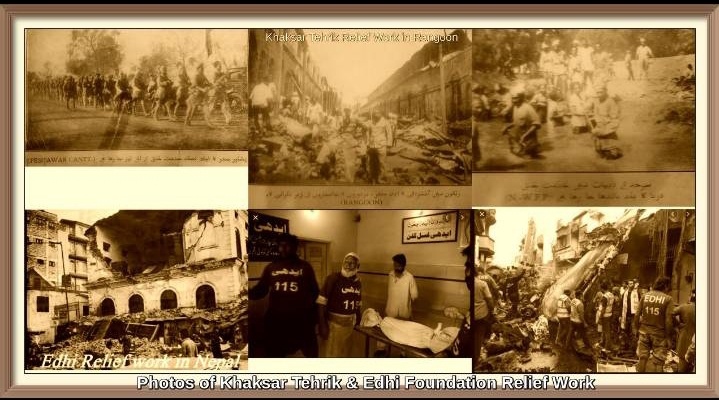 To inculcate a spirit of social service among the nation, Mashriqi’s weekly newspaper (Al-Islah) regularly published information about the Khaksars’ humanitarian services in different parts of the Indian sub-continent. Upon Mashriqi’s instructions, the Khaksars also used to deliver lectures on community service and its benefits to society. Through these activities, the Khaksars became a symbol of unity and brotherhood for the nation to follow.

As a result of Mashriqi and the Khaksars’ efforts, many others were inspired by the Mashriqi doctrine. Some famous examples include social scientist Dr. Akhter Hameed Khan and of course Abdul Sattar Edhi.

Edhi learned about Allama Mashriqi and his Khaksar Tehrik during the time of the freedom movement of the Indian sub-continent. He keenly observed Mashriqi and the Khaksar Tehrik’s philanthropic activities and was impressed with Mashriqi’s large India-wide following and the impact of his and the Khaksars’ services on society. Following partition, Edhi moved to Pakistan and later began humanitarian work. Edhi’s biography “A Mirror to the Blind – Abdul Sattar Edhi” spoke of Mashriqi’s influence on Edhi. According to the biography, Edhi stated “Khaksar Party moved me [Edhi] by its mission to solve people’s problems by travelling from village to village and door to door.” Another work also mentions that Edhi was inspired by Mashriqi: “Edhi is also inspired by the famous Khaksar Tehrik…Dressed in Khaki, the colour of the earth and…with belchas (spades), the volunteers would walk from one village to another village to solve people’s problems” (“Urban Navigations: Politics, Space and the City in South Asia” edited by Jonathan Shapiro Anjaria, Colin McFarlane, 2011, Publisher: Routledge).

Indeed, it is apparent from Edhi’s life that he shared much in common with Allama Mashriqi. Like Mashriqi, Edhi believed in protecting basic human rights without discrimination and building a spirit of brotherhood, mutual respect and unity. The Khaksar Tehrik was founded on the principles of self-help and improving the lives of people of all faiths. Similarly, the Edhi Foundation’s guiding principles of self-help and its services to the public were in the same spirit as the community service offered by the Khaksar Tehrik. Like Mashriqi, Edhi did not believe in taking advantage of his position for personal gain, nor did the two men waste much time on social gatherings, inaugural events, or other superficial ceremonies.

In his ways of living, Mashriqi wore simple clothes and lived a basic lifestyle to be one with the average person – Edhi also did the same. Mashriqi also encouraged women’s participation in society, for example by inviting them to become active and equal members in the Khaksar Tehrik. Edhi too believed in women’s empowerment. And during the last days of their lives, both men refused the Government of Pakistan’s offer of treatment abroad.

With all their similarities, there were some fundamental differences between the two men. Mashriqi was a world-famous scholar and mathematician who came from a well-known family; Edhi had a much more modest background and was uneducated. Mashriqi’s Khaksar organization was much larger – it grew to over 5 million members (along with supporters), whereas the Edhi Foundation has “round six thousand volunteers” (edhi.org). Mashriqi’s interests were also broader, as his work spanned literature, politics and the freedom movement; Edhi’s primary focus was on humanitarian work. Finally, the source of their funding also varied – the Khaksar Tehrik was self-funded by Khaksar volunteers, whereas the Edhi Foundation is run based on donations.

Ultimately, both men served humanity selflessly and without expectation of any financial or other personal gains. Their services to the region are unmatched and their lives serve as an example for people to follow in order to create a better world. As a result of their efforts, both men were nominated for the Nobel Prize – Mashriqi in Literature and Edhi for the Peace Prize. Hopefully others will learn and follow the examples of these two men.

Upon their passing, both men were widely mourned and the nation remained in a state of shock, as the news was widely reported in national and international media. During their lifetimes both men had selected their final resting place. As such, Mashriqi is buried at the Khaksar Tehrik’s headquarters in Icchra (Lahore), while Edhi is buried in Edhi Village near Karachi.

Nasim Yousaf, a grandson of Allama Mashriqi, is a researcher based in the USA. He has presented papers at academic conferences, published many books, compiled a digital version of his historic works (e.g., “Al-Islah” weekly journal), and contributed articles in prestigious and peer-reviewed encyclopedias/academic journals. His works have been published in newspapers in both the East and West.

Allama Mashriqi and the Khilafat Movement