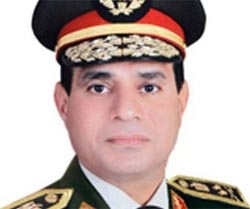 “The armed forces appreciate all the exerted efforts from all sides to end the sit-ins in peaceful ways,” army spokesman Colonel Ahmed Ali said in a statement on the armed forces’ Facebook page, Xinhua reported.

The military chief in the meeting with Abdullah Shaker, chief of the Salafist Intellectual Shura Council, preacher Mohamed Hassan and other ultra-conservative Salafist members, promised not to end the peaceful protests with violence, daily al-Masry el-Youn newspapers reported.

“The country’s president and prime minister are those assigned with the tasks of running the state,” Sisi said.

Hassan said his attempt for reconciliation is in coordination with the National Alliance for Supporting Legitimacy, a pro-Morsi alliance led by the deposed leader’s Muslim Brotherhood (MB).

“The Alliance members are asking for preventing bloodshed, not ending the protests by force, and releasing those detained after June 30,” he reiterated.

“The national reconciliation is very important,” Hassan said, adding that he will meet and convince the members of the alliance to join the dialogue.

Morsi’s supporters have been holding sit-ins for over a month at Rabaa Al Adawiya square in Cairo’s Nasr City and al-Nahda square in Giza, demanding the reinstatement of their legitimate president.

However, the meeting with Sisi did not include any member of the MB’s Freedom and Justice party and Salfists al-Nour party.

The army statement urged protesters to seek the national unity, and to join the future roadmap with the other Egyptians.