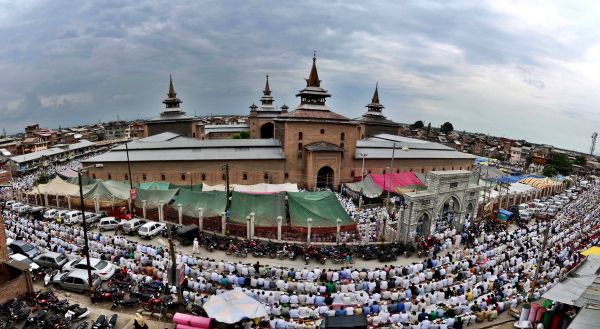 Srinagar : Muslims in Jammu and Kashmir on Tuesday thronged mosques and Eidgahs in large numbers to offer Eid prayers which passed off peacefully.

Large prayer gatherings were seen at Hazratbal shrine and other Eidgahs in Srinagar city while authorities disallowed Eid prayers at the Jamia Masjid in old city Nowhatta area because of law and order reasons.

Men, women and children dressed in their best thronged mosques, shrines and Eidgahs across the Valley to participate in the special Eid prayers that mark the end of the fasting month of Ramadan.

Gusty wind and rain in Shopian, Baramulla and Kupwara towns forced the devotees to offer the Eid prayers inside the local mosques.

After greeting each other, devotees dispersed peacefully and there has been no report of any untoward incident anywhere so far.

Authorities had made elaborate arrangements of security and sanitation around different prayer places in the Valley.

Security forces were deployed in sufficient strength at all law and order sensitive places in Srinagar city and other cities and towns of J&K.— IANS