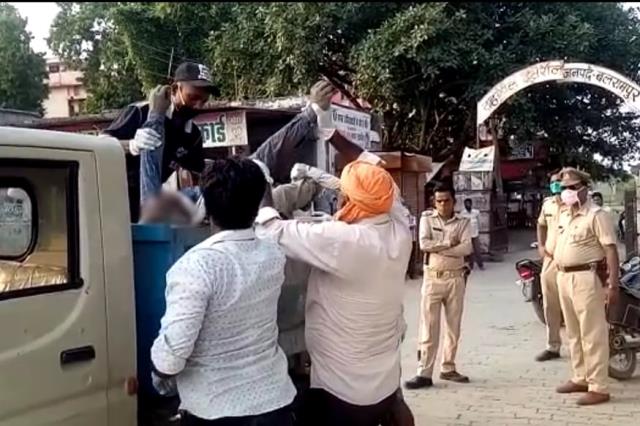 Lucknow, 11 June: A small video clip showing municipal workers dumping the body of a man in a garbage van in Uttar Pradesh’s Balrampur town attracted strong criticism from scores of people on social media. The man was identified as 42-year-old Mohammad Anwar.

In the video that has gone viral, three policemen are seen watching the incident. According to NDTV correspondent Alok Pandey, the alleged police personnel were suspended over the same.

Local police chief Dev Ranjan Verma has called the incident “inhuman and said an inquiry would be conducted into the same. He added it is not clear if the man who died was Covid positive but no one deserves such indignity.

Another visual from the same location shows that an ambulance was available at the place but its staff reportedly refused to touch the body because of fears over Covid-19.

Senior journalist Atul Chaurasia said that the incident is “utterly shameful”. “They are making law to protect cow but no value for human life,” he added in an apparent reference to Uttar Pradesh government’s fresh ordinance providing maximum imprisonment of 10 years for cow slaughter.

Condemning the incident, Congress party spokesperson Abhishek Singhvi said, “As a citizen of this country, I hang my head in shame”.

Muslim Majlis-e-Mushawat president Navaid Hamid called it a case of “Muslimphobia”. In a tweet, he said, “The dumping of a Muslim dead body in a garbage van in UP’s Balrampur indeed reflects mindset of govt staff & @balrampurpolice towards Muslims in general. It’s shows cruel face of #Muslimphobia”.