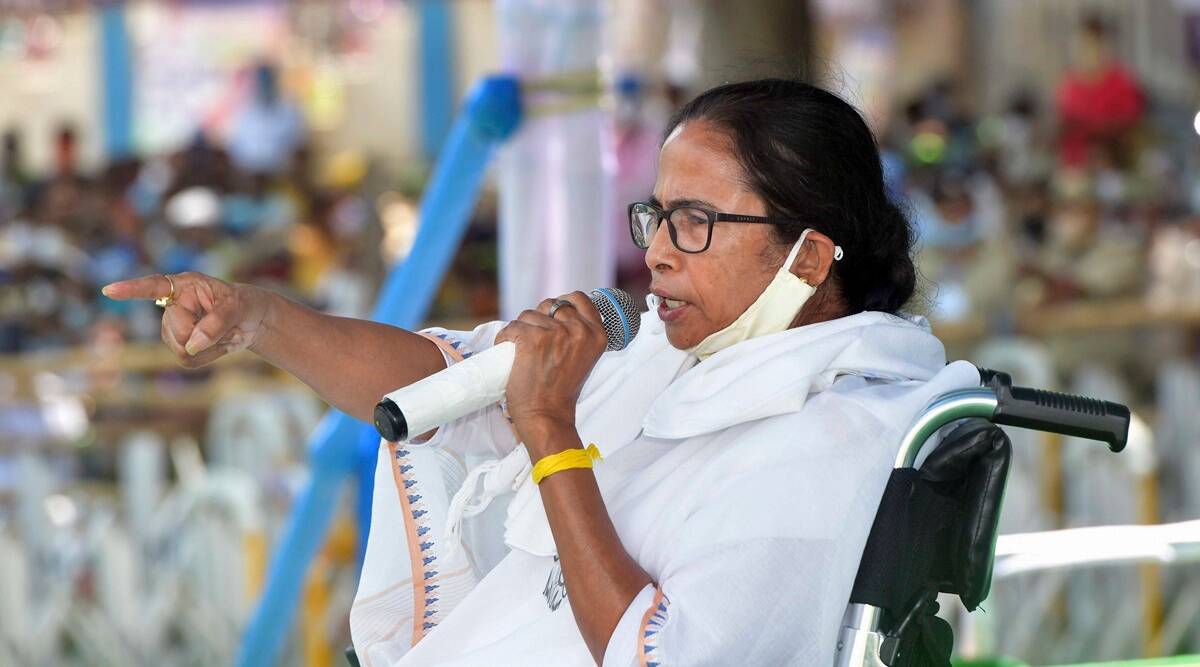 KOLKATA — On the last day of her 50-day long poll campaign in West Bengal, Chief Minister Mamata Banerjee on Monday criticised the Election Commission for allegedly working in favour of the BJP, besides holding the poll panel responsible for the upsurge in Covid cases in the country.

Earlier in the day, the Madras high court had observed that the EC was “singularly responsible” for the second wave of Covid-19 and that the poll body’s officials could be “booked for murder” for allowing political rallies amid the pandemic.

Welcoming the Madras HC observation, Banerjee said, “The Election Commission cannot ignore the fact that it is responsible for this huge upsurge in Covid cases in the country. It brought 2 lakh police personnel from outside, and none of them have gone through Covid test.

“They are acquiring schools, colleges and stadia, causing hindrance for the government and the people. I have been continuously telling the EC to withdraw the forces, but it kept on working under the instruction of someone else. The EC is responsible for the spread of the infection and it cannot shrug off the responsibility.”

Earlier, the Calcutta High Court had censured the EC, saying that issuing circulars and holding meetings on Covid guidelines were not enough.

Following the Calcutta HC order, the EC had capped the attendance at public events to 500 people for the last two phases of Assembly elections in West Bengal.

Accusing the Commission of working as the mouthpiece of BJP, the Chief Minister, who was campaigning virtually for Trinamool Congress candidates in North Kolkata, said, “We have told repeatedly to club the elections, but the EC kept on working on the directives of the BJP. This BJP government is an example of ‘monumental incompetence’. It has only one agenda and that is to conquer and for that it has jeopardised the lives of the people”.

Cautioning the EC of approaching the Supreme Court, Banerjee said, “The EC has lost all its credibility. The democratic exercise of an entire country cannot depend on the whims and fancies of three nominated persons. They had done it in 2016, but I kept quiet thinking that they will rectify themselves, but nothing has changed.

“The Election Commission has lost all its credibility, but someone should ‘bell the cat’ and so I am going to the Supreme Court against this partisan attitude of the Commission and its irresponsibility that led to the deaths of so many people.”

The Chief Minister also accused the Narendra Modi-led BJP government at the Centre of depriving the state of its legitimate oxygen supply.

“SAIL used to supply oxygen to us, but it has been told to give the supply to Uttar Pradesh. Naturally, I had to divert the oxygen needed for industrial purposes to meet the medical requirement. I have arranged for another 5,000 cylinders. We are in favour of providing free vaccine to all the people, but they are not providing us the details so that we can purchase them from the market,” Banerjee added. — IANS