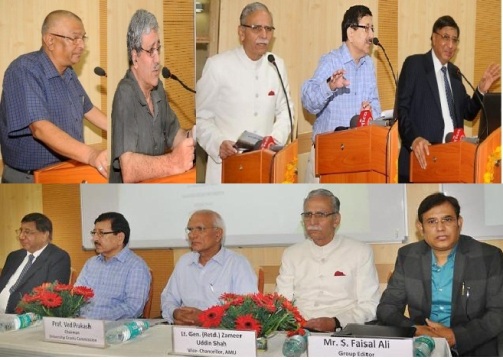 New Delhi: The National Policy on Education was framed in 1986 and modified in 1992. A lot of changes have taken place since then warranting a revision of the Policy. to meet the changing dynamics of the population’s requirement with regards to quality education, innovation and research. The Government of India initiated a series of consultations at state, district, block and village levels to elicit public opinion on the subject including taking input from citizens online.  A document titled,” Some Inputs for Draft National Education Policy 2016 “   has been put in the public domain in order to solicit public opinion. It has evoked a lot of response by a number of NGOs, Civil Society Forums and Institutions by organizing  discussion sessions and consultations to discuss issues relating to the New Education Policy (2016). One such consultation was organized by Jamia Hamdard University in association with Sahara News Network on 24th September, 2016.

The inaugural session of the consultation was academically very illuminating and was attended by a number of Vice-Chancellors apart from the Chairman, University Grants Commission who inaugurated the consultation. The Vice Chancellor, Jamia Hamdard, Prof. Hasnain presided over the function.  Some pertinent issues were raised which among others included possibility of linking salary with research; integration vs assimilation; prescribing modalities, based on authentic data; institutionalize authenticity of data; need for innovative funding mechanism; policy retrospective and need for a strategy for application of mid-course corrections.

The inaugural ceremony was followed by a session on “Quality, Credibility and Objective of Education: A Review of NPE 2016” chaired by Prof. M. Aslam, Vice-Chancellor, IGNOU. The two panelist who made their interventions during this session were Prof Talat Ahmad, Vice-Chancellor, Jamia Milia Islamia and Prof. M. Muzammil, Vice Chancellor, Dr. Bhim Rao Ambedkar University, Agra.

Prof. Aslam in his opening remarks stated that, “The preparation of Education Policy document is a serious exercise which should provide us with an overall framework that governs operation/ implementation of education system in a country. It has to clearly define purpose of education, objective/attainment, methods to be used to attain given objective and instruments to measure quality, success or failure.

Prof. Talat Ahmad in his intervention stressed the need for relevant syllabus and dedicated teachers. He felt that research & Training has to go hand in hand. Regarding credibility, Prof Talat stated that problem with the present education system is that knowledge & degree do not match.

Prof. Muzammil in his intervention mentioned that although higher education is presently mis-managed in the developing world as a whole but there are some success stories as well. The problem is that these success stories are nor replicable. He considered it important that a balance is maintained among quality, quantity and equality in education. He felt that education policy should focus on teachers whose timely capacity building can play an important role in improving the quality of education in the country.

These interventions by the eminent panelists were followed by a discussion, in which participants raised concerns about the credibility of educational interventions and need to learn from past experiences.

Prof M. Aslam in his concluding remarks stated that with proliferation of and competition among higher education institutions and the advent of open distance modalities & ICT revolution the issue of quality in the educational enterprise came to the fore.

Steadily, other factors like systemic, philosophical and pedagogical factors relevant to the issue of quality in education started emerging. He concluded by saying that, “I believe if there is anything that can keep us relevant both nationally and internationally, it is only quality of our education. Our New Education Policy needs to pay serious attention to this.”