The topic of the convention was “Women & Social Responsibilities” wherein the key speaker was Dr. Asma Zehra from Hyderabad, who is executive committee member of the AIMPLB. The other speaker was Ms Tabassum Siddiqui from New Delhi. The convention was hosted by Congress leader Arif Masood, who is also executive committee member of the AIMPLB.

In today’s fast moving society the rights of women is at stake and their position has become very much vulnerable. The balance between the rights of women and its protection and her family and social responsibilities is disturbed totally. Women have to play an important role in society, family and the country. They are to be made to fulfil the responsibilities as a daughter, sister, mother, wife and daughter-in-law in society and as a citizen of the country. 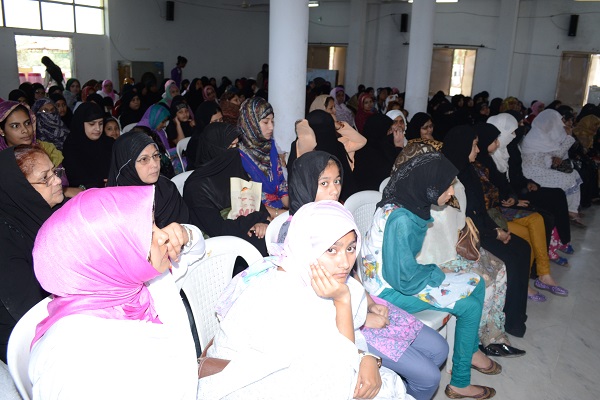 However, the western culture has made women more victim of luxury and lust. They are escaping from the basic role of family and society. Women’s freedom is taken in a different context. The building of family and society on strong moral values is vital for community and nation. And as such their empowerment with knowledge and proper guidance is very essential. This was the gist of the convention wherein different speakers emphasised upon.

Interacting with media persons after the convention Dr. Asma Zehra said India is facing a number of challenges and two issues stand out as the most important for society. First the protection of rights of women and controlling the crimes against women. Secondly, the impact of western culture, films with nudity and obscenity has degraded the moral values and social fabric of Indian society.

Dr. Zehra said that Muslims lag behind in education which is largely responsible for most of the problems faced by the community. If women of the community is educated, things would change as women are the axis of Indian families. Sachchar Committee report has also highlighted that all communities progressed after independence except for Muslims, she pointed out.

She said Muslim women could be empowered through education as one woman can reform the whole family. Moreover, this would help her in protection of her rights and controlling crimes against women.

Replying to a question, she said the right of Talaq given to menfolk in Islam is being misused by men. They lack awareness as how to exercise their right of pronouncing Talaq as ordained in Islam.  “Adaab-e-Talaq Mardon Ko Nahin Sikhaejate Hain”, she remarked.

In matrimonial discord or disputes Muslims should avoid going to courts. They should approach first family elders to solve their issues to save their marriage or then go to Qazis to settle their cases, she added.

While replying to a questioner, she said that Shariah laws stand on moral grounds in India. They exist as personal law in the country wherein there is no freedom to award punishment to those who breach Shariah commandments, she pointed out.

She said a shift in education in Muslim institutions, especially Madarsas could be seen. Madarsas are going through a lot of reforms and integration of education is taking place. Most of the Madarsas have taken up computer education in a big way.

Dr. Zehra stressed on the need of more interaction between religious heads of different communities. It is the duty of Muslims to initiate, discuss and debate social issues with members of other communities so that co-existence of communities become more harmonious. Polarisation in society should be discouraged as it serves the purpose of vested interests. She said that such conventions are very helpful to uplift and empower women.

Answering a query, she said that one cannot avoid use of technology like internet, mobile phones or television. An educated woman could only guide her children on how to use technology in a positive manner. Giving an example she said a knife is generally used to cut vegetables and cakes which is the proper use. However, the same knife can used to harm people if one’s intentions are bad, she explained.

She said that Tehreek Islah-e-Moashra Committee of AIMPLB is conducting special meetings and public programmes across the country to bring changes and reform the society. (pervezbari@eth.net)