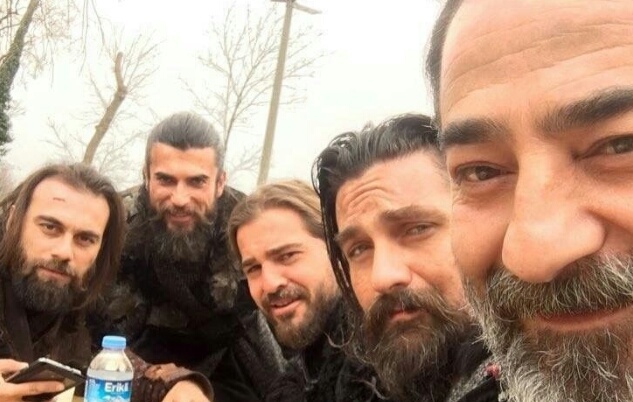 Yawn. Another list of do’s and don’ts, we did what we do best.

We paid no heed.

But this time there was a difference.

The decree to ‘unwatch’ Ertugrul came from the two camps that are  normally rabidly opposed to each other, the fundamentalists and the liberals.

The two and two really made four,  this time.

“That this serial is frankly propagandistic and ideologically motivated is beyond doubt. It has been manufactured for a purpose. But what purpose?

If it seeks to project Islam as a religion of peace and to counter Islamophobia, then the very opposite is achieved. The first scene of the first episode begins with sword-making and sword-sharpening in the background of nomadic tents.”

I want to humbly ask the professor, didn’t your country export Klashinkovs to the Kayi tribe in the 13th Century?  If not, why? Was an enquiry commission set up? Also, do you want them to fight the battles or defend themselves with sticks and stones? Can a tribal society survive without weapons for defence or for hunting?

Did Julius Caesar fight with his tooth brush?  Were the Romans fiddling with the flute and never wielded swords? How was Shylock planning to take his pound of flesh from Antonio?  Digging the flesh with the lawyer’s pen?

Prof. Hoodbhoy ridicules Ertugrul as a piece of fiction and he is right. Quoting,  Mehmet Bozdag, the director of the series who confesses,

“There is very little information about the period we are presenting — not exceeding 4-5 pages. Even the names are different in every source. The first works written about the establishment of the Ottoman State were about 100-150 years later. There is no certainty in this historical data… we are shaping a story by dreaming.”

Even after this confession, the Professor refuses to relent.

I was urged to watch Erturgul around 2016, a series that revives the Islamic spirit. My ears perked up at this grand proclamation and I began Dirillis Ertugrul Season 1 episode 1; and episodes 2, 3, 4, ….

The promised reviving of spirit failed to find me; genuine confession earned me, an earful of how lacking I was in my Islamic spirit that despite attempts by Mehmet Bozdeg, it refused to get rekindled.

From that careless watching of three episodes, all I  could retain was the budding romance of Ertugrul and Halime, whom he saves from a caravan ambush by the Templars..

A la Bollywood, I laughed and my mind switched off.

It has music, singing, and women.

Oh, I see. But where to escape, then?

It has Ibn e Arabi.

Son of Arab?  MBS?  My poor knowledge was showing its slip.

No, he was a 13the century Sufi saint, I could smell the sternness of the tone.

He was a bad influence. Pat came the reply.

But he was Shaykhul Islam of Sufism!  I tried to bring a twinkle in my eyes.

We say, don’t watch and that is it. You should not watch. The fatwa arrived.

I will see about that.

Nay, I was using the proverbial slang, let me decide about it.

We have decided it for you. They took out the last leaf out of their Fatwa basket and thundered.

I sighed aloud and folded my hands emoji style.

I could hear the mumble as I turned around and soon some Libbus came and stood on my head.

I narrowed my eyes, threw a stare and pretended to be casual,

Oh, yes, I just heard that.

No, no, we are asking you again, to not watch.

You want me to not watch it?

So you are agreeing with the Fundoos.

Never, the scorn here was deeper.

We have different reasons for you to not watch it.

I know, I tried to raise an eyebrow but the Fundoo asked me to stop.

It is pure propaganda, the libbu continued.

I gulped down some water to smoothen the storm that was trying to rise up inside me and turned over to the Libbus:

If Ertugrul is propaganda then we are used to such propaganda.

We squeal, clap and are elated to see Iron man and what not man, Saving America’ from unknown alien threats, and we do not blink an eyelid.

Are you crazy? Hollywood is the supreme example of fine, a refined  art.

Double refined? I asked innocently because I am really innocent.

But they didn’t believe and stared at me in their cooked up wrath.

Ertugrul is going to make you a terrorist, to be brief.

This was a Libbu Fatwa.

I turned around again.( Old habit of ours, for years, turning round and round, as people ask us to, without stopping to think for ourselves, another old habit.)

Hainn? My ignorance was showing.

An apostate,  heretic. The disgust in the voice was palpable.

He never gave a Ted talk.

But he was called Shaykhul Akbar, the king of the Sufis, I smiled innocently, because I am really innocent.

Nay, the other poked him in the arm, Wuhdutash shuhood.

Whatever, the first Fundoo got irritated by the poking.

He left it incomplete, fearing the confusion between those two exquisite terms.

Believe what?  I had to resist winking at him.

You believe in their propaganda. You start enjoying Islamic conquests. You secretly wish for the caliphate.

The libbu had come back.

How do you know so much about me? I pretended to laugh nervously.

Stung, the Libbu brought forth some froth to his mouth and shouted,

You want to bring back Caliphate through Ertugrulllllllll……

Shhhhh, MBS might listen. I pretended to whisper, taking my hands near my mouth and cupping them, in half a circle.

No, she will not watch it, it has singing music and women, with some special sheepish emphasis on the last word,

Fundoos can be cute, sometimes.

Yes, the Libbu asserted, she can’t watch it or else she will turn into an extremist.

I didn’t know, I was a factory product.

They had joined hands together against me.

So I spread my hands side wards and shut them out.

I sat down and watched Ertugrul, skipping the first season and directly jumping to the second. Felt involved.

The antiques of Noyan , like that great tempter of  Paradise Lost; Satan looked mesmeric.

Then Ertugrul began rising on the horizon.

The tribe of Kayi,  has to fend off  the harsh winters of Anatolia along with  enemies from within and without. The simplicity of the tribal life amidst the meadows of happy sunshine was pleasing. The protagonist is a real hero; he fights for justice, cares for his people, fulfills his promises forgives his enemies but doesn’t mind killing them if the treachery crosses a certain limit. He is loyal to his wife, dotes on her, and yet is firm in reprimanding her, if situation demands.

That rare combination of Control and Balance;  you see.

Ertugrul swears by the Islamic principles of dignity forbearance gratitude, a strong belief system and forgiveness in a way that is comprehended with ease without getting preachy and lives by the example of Prophet Muhammad PBUH, to be loving and forgiving even one’s enemies.

Kayi women weave carpets to make a living, ride horses, wield swords, and take part in decision making. These mother figures, wives are respected for their views, and are not just symbolic figures nursing babies or cooking feasts. This is refreshing, after often  seeing thickly make-upped women buried in vulgar jewelry with nothing else to do but scheming against each other. The popular notion of Muslim women being oppressed is shown the door in this Turkish series.

The twists of the plot keep one engaged, but a tight editing was needed.

Yes, there is violence. Graphic violence. Heads ripped off bodies, blood spilling in the air like it is tomato ketch up, enough to make you wince.

The hostility for Ertugrul from fundamentalist and liberal camps is amusing and betrays some complex inherent biases.

My life, my choice, my TV show.

I don’t need to give explanations for what I choose to watch. Nor I demand to know from you, why you love Hollywood that is often full of Islamophobic propaganda.  Ertugrul like Iron Man, Avengers and co, saves people from evil   swears by Islamic moral code of an upright man who forgives his enemies and treats Muslims and non Muslims as equal human beings.

Ertugrul, father of Osman, the founder of the Osmania Sultatnate, doesn’t claim to be authentic history,   hence can be enjoyed as a work of dramatic fiction. The geo-political ramifications connected to Ertugrul make it more interesting to watch.  Common conversations now are tinged with Artuk Bey , for a wise patient scholar,  Turgut for a dashing brave fighter, Bamsi for a likeable simpleton, Halime for a beautiful daughter or  beloved.

The scarred Muslim imagination starving of a hero figure has at last found something to cherish truly.

Interesting to note my colleague Prof.Dinanath Patil had urged me to watch this series, earlier this year, which he described as the glorious history of Kayi Tribe about Turkish warrior Ertugrul Ghazi. The reach of Ertugrul is not limited but ever expanding.

Ertugrul’s message: It is your character /conduct that speak and not your tall talk.

Ertugrul might be propaganda, but it is our propaganda.

Dr. Asma Anjum Khan from Maharashtra teaches English, a motivational speaker, has written for  prestigious national and international publications and websites on social, ethical, and gender related issues. FEEL (Foundation for English and Ethical Learning) is her NGO that wants to bring change by equipping people with the language of English.