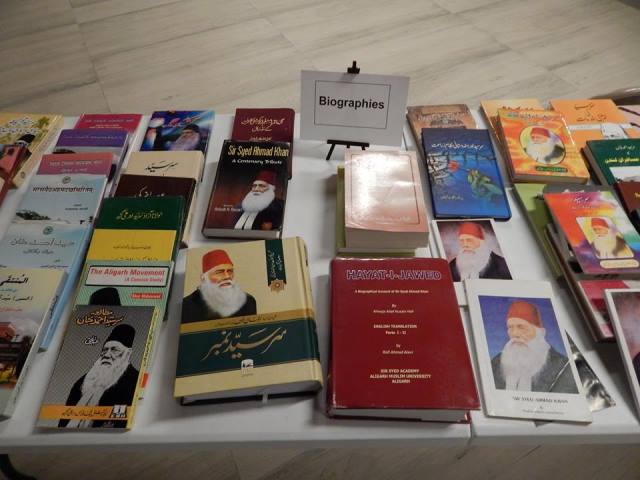 Washington DC: Following India’s unsuccessful first war of independence from the British colonial rule in 1857 and the atrocities of the British army on them, the north Indian community was very disenfranchised and alienated from the British rulers.  That led to their turning away also from European curriculum education imported by the British. In these very dire circumstances Sir Syed Ahmad Khan struggled valiantly to fulfill his mission.

He went door to door to raise funds, to persuade his opponents and to beseech the British rulers.  Finally, in 1875 he was able to start a modern curriculum school by the name ‘Madrasatul Uloom’ in the small town of Aligarh, about 80 miles from Delhi.  In 1877 he developed the school into the Mohammadan Anglo Oriental (MAO) college.

The followers of Sir Syed and the Indian community continued to make the MAO College grow and in 1920 it was transformed into the modern Aligarh Muslim University (AMU), which is today one of the world’s most prominent and modern universities of the Muslim community.  Today there are 30,000 students and 2,000 teachers at AMU that comprises of 15 faculties and 7 colleges at the Aligarh campus and 3 remote extension centers in Kerala, Bihar and Bengal.  A large number of students, teachers and staff at AMU are non-Muslims.

To commemorate the bicentennial of the 1817 birth of Sir Syed Ahmad Khan, The Aligarh Alumni Association, Washington DC, the oldest organization of AMU alumni in US organized a very impressive half day event. The event was also supported by many like minded local organizations like American Indian Muslims (AIM), Urdu Academy of Maryland (UAMD) and University of Karachi Alumni Association (UKAA).  It turned out to be a grand celebration of the educational, cultural and social basics that form the multi-religious, multi-ethnic Indian society.

A large number of AMU Alumni and friends of AMU from many cities across US and Canada assembled in Washington DC on September 9, 2017 to pay their respect to Sir Syed and cherish his contributions. The memorable event attended by about 300 participants was held at the Turkish American Community Center, Lanham, MD, a suburb of Washington DC.

The event comprised of a two-hour long seminar entitled “Peaceful Coexistence in Today’s Multicultural Society”, an exhibition of portraits of Sir Syed and his major colleagues in the 19th century educational movement and books written by them, a play on Sir Syed’s struggle to build the MAO College, and a humorous skit highlighting the experiences of current South Asian immigrants in the modern multicultural American society.

The seminar, the highlight of the day was addressed by Prof Geoffrey Willette, Dean & Professor of Philosophy at the Mercer University, Atlanta, GA; Prof Abdelaziz Sachedina, Professor of history at the George Mason University, Virginia; and Frank Islam, a Washington DC businessman and philanthropist.

Prof Willette, whose Mercer University established a Memorandum of Understanding with AMU a few years ago, described the ongoing very successful program of exchange of students and teachers between the two universities, and how it is benefitting both institutions in developing understanding between the Indian and American societies.  Prof Sachedina elaborated on Sir Syed Ahmad Khan’s books on interfaith dialogues that taught the world respectful coexistence among diverse communities, one hundred and fifty years ago.  Frank Islam addressed the critical need to spend much more effort to spread market-oriented education among India’s minorities and deprived communities in order to raise their standards of living.

In the after-dinner hour the audience was entertained by an interesting half hour play that was a poignant re-enactment by some alumni and stage-actor friends of AMU ( A Abdullah, Khalid Hameed, Ali Rizvi, Masood Farshori, Shoeb Ali Hasan, Farooq Ahmad) of an 1880 event when, the septuagenarian Sir Syed Ahmad Khan and his younger colleagues Prof Shibli Nomani and Prof Altaf Hussain Hali assembled in a theater in Delhi to raise funds for the MAO College in Aligarh.   Another interesting entertainment event was a skit by AMU alumnus Javed Danish, Toronto based storytelling actor,  who put on the costume and narration style of typical storytellers from the courts of India’s Mughal kings to regale the audience with the very humorous travails, “Daastan hijraton ki” (tale of the immigrants), of southasian immigrants in today’s America.

The Aligarh Alumni Association, Washington DC presented a lifetime service award to Dr Abdullah Abdullah, who established the organization in 1975 and has been its main stay throughout.  Finally, all assembled on the auditorium stage to sing the renowned anthem of the AMU to again think of their almamater and its founder.