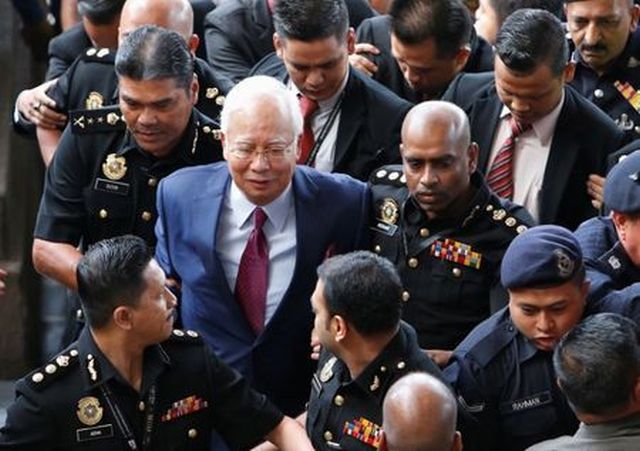 Kuala Lumpur : Former Malaysian Prime Minister Najib Razak was charged on Wednesday in a court here for his alleged role in the 1MDB scandal, involving billions of dollars being embezzled from a government fund and fraudulently spent around the world.

He was charged with three counts of criminal breach of trust and one count of abuse of power in connection with funds from SRC International, a former subsidiary of state fund 1Malaysia Development Berhad (1MDB), reports Efe news.

The charges carry a maximum term of 20 years in prison.

Najib, 64, was arrested on Tuesday at his residence in the capital, the 1MDB Task Force confirmed.

The former leader, who spent the night in prison, arrived to a media frenzy at the court early in the morning wearing a dark blue suit and a red and blue tie.

The arrest on Tuesday came following an investigation into how billions of dollars went missing from state fund 1MDB, which he founded.

The former leader has been accused of diverting around $681 million to his private accounts from 1MDB.

Najib has denied the allegations, saying the money was a donation from a Saudi prince, and he was cleared by Malaysian authorities while in power.

The case was reopened after Malaysia’s change in government in May, and new Prime Minister Mahathir Mohamad banned his predecessor and wife Rosmah Mansor from leaving the country.

Najib and his wife have since testified before the anti-corruption commission. His stepson Riza Aziz also gave a statement at the commission on Tuesday.

Last week, Commercial Crime Investigation Department chief Amar Singh said cash and luxury items taken in May from six properties linked to Najib are worth up to 1.1 billion ringgit ($273 million), describing it as the biggest seizure in Malaysian history.

Six other countries, including the US, Switzerland and Singapore, have opened judicial investigations into the 1MDB scandal.