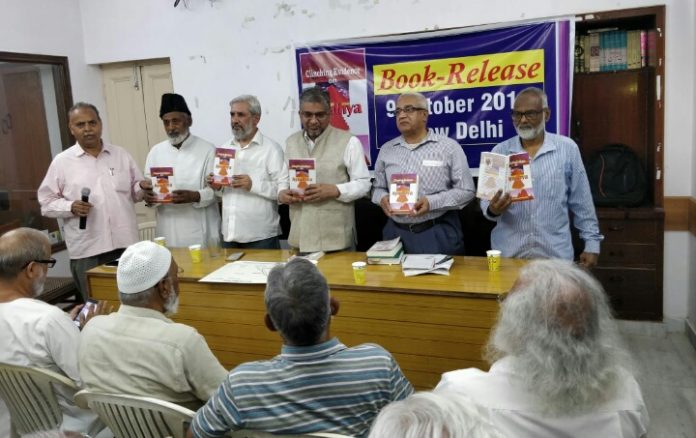 In his presidential remarks, Navaid Hamid congratulated Dr Agwan for a valuable publication which came to light though a little late amidst a wider controversy on the Ayodhya issue but would hopefully serve a great purpose in locating the real Ayodhya. He said, as many times in his academic works before, the author had put his hard work and scholarly ingenuity while discussing some untouched aspects of the grand controversy. He wished that the findings of the book would impact on understanding the issue dispassionately, though for some sections it had become a game of passion.

While releasing the book, Ravi Nair said that though the book was assiduously prepared with extensive research by the author, he did not accept its very premise of dealing with a concocted mythology as he considered the story of Ayodhya to be an absolute myth and he was apprehensive of the possibility that it might simply be a trap of endorsing false claims in the name of history. He remarked that the Ramayana is not a historical work but a poetic rendering and there existed many of its versions, even with contradictory statements. In such a situation, according to him, the best way in dealing with the issue is to rely on the legal course. He emphasized that the title suit of Babri Masjid land was based on a wrong act according to the FIR, which clearly noted surreptitious installation of idols in the historical mosque seventy years back. He criticized the Allahabad High Court’s decision for its tripartite division of the disputed land among the contesting parties. He remarked that on the one hand a party of the dispute was not prepared to accept a judicial decree against its sentiments, the other was appearing surrendering on the issue. Research and studies involving mythology should be done with care and caution as it may be an innocent trap of Sanskritization, he apprehended.

Dr M. Rafat pointed out what the author highlighted was that the present Ayodhya was not the epic place and to prove his point he not only relied on mythological statements but also on many facts from archaeology, anthropology, geography, epigraphy, global history, genomics, etc. He opinioned that the decision of Muslim organizations to have faith on the judicial system of the country should not be taken as their moral weakness but a way to amicably resolve an issue having serious implications for future of the country. He went on to say that Ayodhya issue was the product of a distorted history and dispassionate works like that of Dr Agwan could perhaps set the discourse on the right track for its long overdue remediation.

At the beginning of the function, the author of the released book introduced the background and contents of his research work. He said that the work was based on his multi-dimensional research in search of the Epic Ayodhya in the wake of the fact that neither Ayodhya nor places associated with the Ramayana Route could be convincingly located in spite of excavations for more than six decades, which prompted him to undertake a research on the issue two years back. His major findings have been discussed in the book as 17 major evidences which underline that there is hardly any possibility that Ayodhya in District Faizabad could be the Epic Ayodhya. Agwan listed 20 places from Tanzania in the west to Vietnam in the east where existence of ancient Ayodhya is possible. He applied various scientific methods in the context of epic and Puranic statements and arguments in current debates regarding Ayodhya and reached to his strange conclusions. He regretted that many scholars and historians are creating new myths by distorting available facts.

Mohammad Tayyab conducted the program which began with the invocation by Hafiz Dilshad Ahmad.