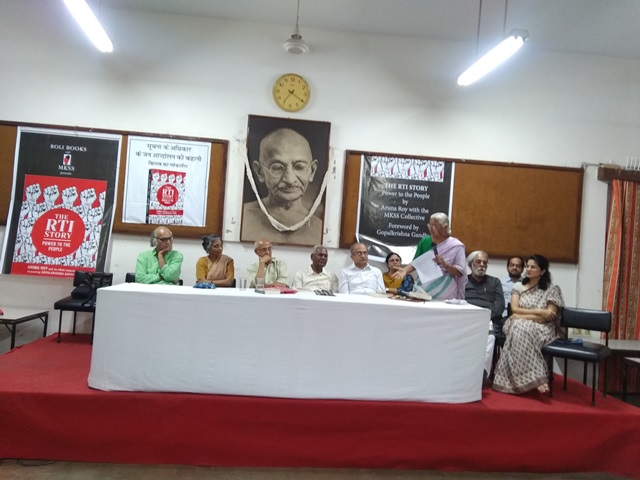 New Delhi: Over 200 eminent activists from peoples’ movements gathered Monday to celebrate “The RTI Story”, said it is a matter of grave concern over the way history is being distorted and manipulated and the way the youth is being misled by the BJP-led present NDA regime.  They said the Right to Information Act (RTI) is the most effective democratic weapon which was come into being after a long and arduous struggle.

In the wake of the present government’s attempt to weaken the democratic and constitutional institutions, veteran journalist Kuldip Nayar said that the people must raise their voices and stand against any dilution of democracy and democratic institutions. He was speaking at the book-release event of “The RTI Story: Power to the People”, a book written by eminent social activist Aruna Roy and the MKSS collective. The book has been published by Roli Books.

Speaking on the compelling reasons to chronicle the story of RTI and MKSS, Aruna Roy said that the way history is being distorted and manipulated and the way the youth is being misled it is important that an authentic documentation of ordinary peoples’ contribution to India’s democracy is preserved and cherished.

She said the book is an attempt in that very direction and adding that it is dedicated to all those people who have lost their lives while trying to make our governments and systems transparent and accountable to people.

Speaking about the enormous popularity of the RTI law, Venkatesh Nayak of the CHRI said about 300 RTI pleas are being filed in the country every hour, but still, challenges remain, for instance, the number of women and people from rural India using the RTI remains abysmally low.

Underlining the uniqueness of the journey of the RTI in India, Prof. Shekhar Singh said that the reason why millions of people have got associated with this movement in India is that there was a very long peoples’ struggle preceding the enactment of the law and that has ensured that lakhs of people use this law for not only bringing government officials to book but also to redress several of their day-to-day grievances.

Noted activist Harsh Mander said that the RTI is the single-most important weapon to deepen democracy and democratic institutions and people must ensure that those in power are held accountable for their actions and decisions.  While narrating his meeting with Imam Rashdi in Asansol whose son was brutally lynched by the Saffron goons, he said communal hatred is a real danger to the unity of the country

While reminiscing her memories of the almost two-decades-long struggle for the RTI law, eminent activist Medha Patkar said that the way MKSS linked the Right to Information with the Right to Life and the persistence of the people associated with this movement is an inspiration for many other movements across the country.

Underlining the contribution of the institutionalization of the RTI campaign in the form of the National Campaign for the Peoples’ Right to Information (NCPRI), she bemoaned the fact that the quality of the information being provided is still a big hurdle.

Rajya Sabha member D Raja emphasized on the need for all progressive forces to come together to prevent the attacks on acts like the RTI. Writer Arundhati Roy said that when people are being axed and lynched with impunity and when our educational institutions are being attacked on a regular basis and when ‘intelligence’ of all kinds is being diminished, it is important to celebrate and learn from the principles and ideals of the peoples’ movements like the RTI, Narmada Bachao, and many others.

Noted lawyer Prashant Bhushan said the book is an authentic and inspiring account of the struggles for transparency and accountability. He said that the biggest contribution of the MKSS has been the fact that they ensured the involvement of a large number of ordinary people with the movement and facilitated the process of peoples’ ownership of the law.

Speaking about the worrying attacks on the RTI law, Anjali Bhardwaj said that the governments have been trying their best to weaken the law simply because they understand the power that this law has given to ordinary people.

Senior journalist Pamela Philipose stressed on the fact that we need to strengthen the RTI movement and work together to protect this law. She also underlined the important role that editors like Prabhash Joshi, Kuldip Nayar, Ajit Bhattacharjee, and Nikhil Chakravartty played in the RTI movement.

Kavita Srivastava of the PUCL and Nikhil Dey of the MKSS moderated the discussion. The book, first launched in Rajasthan’s Beawar on April 6 chronicles the history of the relationship between a peoples’ movement led by MKSS in rural Rajasthan to the passage of one of the most significant pieces of legislation in independent India – the RTI Act of 2005. It is a special book chronicling the struggles of ordinary people who fought for transparency and accountability of the administration and were instrumental in bringing a transparency framework in the country which has benefited millions since its enactment. Senior journalist Bharat Dogra also recollected his memories of the struggle for the RTI in Rajasthan with which he was closely associated.