Home Indian Muslim After facing flak, UP Haj office that was painted saffron has been...
Facebook
Twitter
WhatsApp
Email
Telegram

Lucknow: After the change of colour of the boundary wall of the Uttar Pradesh Haj committee office – which was recently painted saffron – did not go down well with the Muslim community, the Yogi Adityanath-led Bharatiya Janta Party (BJP) government in the state on Saturday repainted the outer walls to its original colour by giving it a cream coat. The exterior wall, which was painted saffron on Friday, was earlier green and white in colour.

Haj Samiti Secretary RP Singh has blamed the contractor for the incident. “The painting and renovation works of the UP Haj committee office was being done by contractors as per earlier orders. After few newspapers carried a report in this regard, I visited the site and found that the boundary wall was painted with a deep colour which was in violation of the direction. Taking immidiate cognizance, the nazir (treasurer) has been ordered to get the rectification done. An action has been initiated against the contractor,” said a letter issued by Singh to media houses on Saturday.

The Haj House located in Lucknow is used by Muslims as a transit place on their way to pilgrimage in the holy cities of Mecca and Medina. The spiritual journey is done in unstitched white clothing, reflecting a pure heart and a pious disposition.

Since the government painted the building saffron, the move triggered opposition from the Muslim comminity and various political parties. Opposition Samajwadi Party accused the government of “blatant saffronisation” after a series of steps were perceived by it as “anti-minority”. 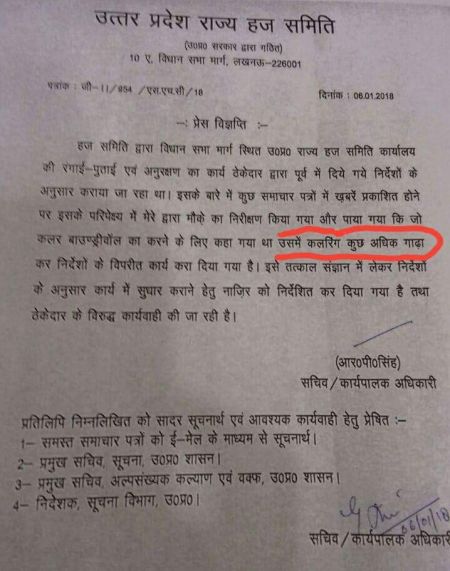 The saffron colour appears to be gradually spreading across the state after the Yogi government took over last year. A nearly 80-year-old police station in the state capital is being given a splash of the colour, days after the Haj office in Lucknow was painted orange. Built in 1939, the Qaiser Bagh police station had the traditional colours of a police station — yellow and red.

In October last year, the Lal Bahadur Shastri Bhawan – the office of the chief minister – was also painted saffron.

The state government has painted saffron everything – from booklets and school bags to towels or chairs and even buses. At least 100 primary schools, 50 buses of the UP State Road Transport Corporation and a number of police stations has been painted so far.

The government has also made it clear that electric poles used to give power connection to unauthorised colonies would acquire a bright saffron hue against a light cream background.

Official booklets that were distributed to mark 100 days and then six months of the Adityanath government had saffron covers and the information diary of the state government, which contains the contacts and designations of various officials, is also saffron.