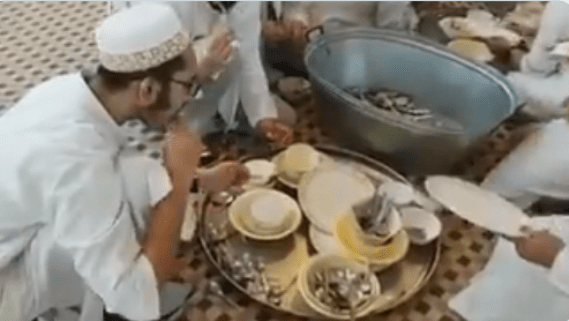 Since 30 March, when news broke that over 1500 members of   Tablighi Jamaat  were stuck  in Delhi’s Nizamuddin locality , a section of media started targeting the Muslim outfit and declared it the  ‘epicenter’ of coronavirus in India. Inspired by  TV channels  fake news targeting Muslims overflowed  social media.  Several  video clips shared on Facebook and WhatsApp purportedly showed Muslims actively working to spread the virus across the country . However,  multiple fact-checking organisations noticed a sudden surge in Islamophobic fake news on social media. Several  fact-checking websites have reported a barrage of fake-news targeting Muslims for the pandemic.

The development came after a video went massively viral which showed a fruit seller allegedly spitting on the fruits that he was selling. The social media users claimed that the man in the video is spitting and putting his saliva on the fruits, thereby, infecting them.

The video uploaded by a Twitter user ‘Desi Mojito’ received an engagement of over 43,000 views at the time of publishing this article.

A video where a group of Muslim men are licking utensils and cutlery is floating across social media platforms and messaging applications. It is being claimed that they intend to spread the coronavirus infection. Alt News has received multiple requests on its official mobile application to fact-check the video.

The Logical Indian Fact Check team investigates the claim that people praying at the Hazrat Nizamuddin mosque in Delhi were sneezing on purpose to spread the novel Coronavirus.

With more than 75 COVID-19 cases reported in the city between March 24 and April 2, Indore in Madhya Pradesh has become the latest cause of worry for authorities.

Most people who have tested positive so far live in small houses in congested localities and authorities are figuring out the source of infection because nobody in the areas had travelled abroad.

KARACHI: A news story with the title, ‘COVID-19: Hindus denied food supplies in Pakistan’s Karachi’, that was released by an Indian news agency, Asian News International (ANI), has turned out to be completely fabricated news.

A 45-second video of an employee at a restaurant packing food has been shared with the claim that a Muslim man is spitting on the food before delivering it to customers. On March 21, Mahesh Vikram Hegde, founder of fake news platform Postcard News tweeted the viral video and wrote, “What’s the use of Janata Curfew when we have deadly sadists like this man? Arrest this lunatic immediately.” This was retweeted over 2,000 times (archive link). Hegde’s call for arrest suggested this is a recent incident from India. Alt News has found Hegde promoting misinformation on numerous occasions in the past.

On March 27, over 900 people died due to novel coronavirus in Italy in a single day. The state’s death toll has now crossed 9,000. Meanwhile, in Iran, the virus has taken the lives of more than 2,000 people. In the midst of the disturbing news, a video is viral on Facebook and Twitter which shows people coming out of a building. It is being claimed that 50 people from Italy and Iran came to Patna’s Kurji last month and have since been hiding in a mosque. They were apprehended by Digha police, the claim furthers.

10 Fake News 10: Muslim man from the Delhi congregation intentionally coughing on somebody.

Indian authorities had linked dozens of cases of COVID-19 to a Muslim missionary group that held its annual conference in Delhi in early March, and health officials were racing to track down anyone who had contact with the participants. Coronavirus fears and religious tension were already at a fever pitch in India, and it didn’t take long for the two forces to intermingle. Videos falsely claiming to show members of the missionary group spitting on police and others quickly went viral on social media, exacerbating an already dangerous atmosphere for Muslims. “Islamophobia has been transposed onto the coronavirus issue,” says Amir Ali, an assistant professor of political science at Jawaharlal Nehru University in Delhi.