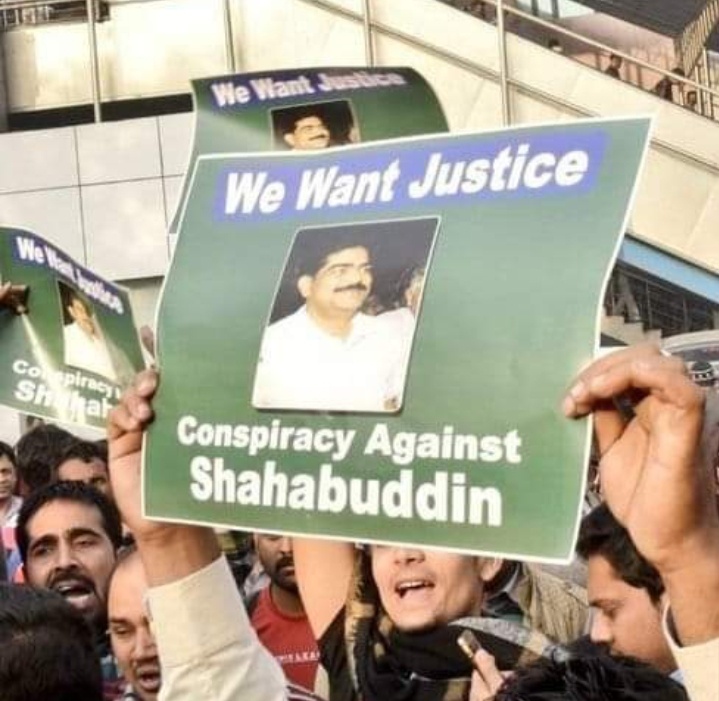 New Delhi: The family of the former Rashtriya Janata Dal MP from Siwan in Bihar Mohmmad Shahabuddin, who died on Saturday due to “COVID-19” in a Delhi hospital, alleged that the Director General of  Tihar jail( Delhi)  has ‘murdered’  Shahbuddin. Besides family members, his supporters also see something fishy in his death. Even his Osma went to court to seek his father’s postmortem before burying him as no autopsy was done on a Covid dead body.  His lawyer also alleges a conspiracy behind his death.

Shahabuddin, 53, was serving a life sentence for murder in Delhi’s Tihar jail and he was known as a bahubali (strongman) and close to the party chief Lalu Prasad Yadav.

He was admitted to a private hospital in Delhi on April 20 after he tested positive. However, his condition deteriorated after two days  and he was put on ventilator support.

“Information has been received from the Deen Dayal Upadhayaya hospital in Delhi about the death of Mohd Shahabuddin. He was suffering from COVID-19 and was admitted in DDU on April 20,” Sandeep Goel, Director General of Tihar prison said.

However, deceased’s family members said they were not allowed to admit him in a better hospital for treatment while the gangster Don Chotta Rajan got this privilege as he was admitted in the prestigious All India Institute of Medical Sciences (AIIMS) in Delhi.

Earlier, his family had approached Delhi High Court seeking better medical attention after his infection following which the Delhi High Court had issued necessary directions to the jail authorities.

Shahabuddin, who was serving a life sentence in the Delhi prison in a 2004 double murder case, was in critical condition and doctors were planning to shift him to Lok Nayak Jai Prakash Hospital, according to The Indian Express.

Taking to twitter his daughter Tasneem Shahbuddin directly blamed the DG of Tihar jail for his father’s death.  She accused the DG of killing her father. She tweeted that “my father Dr. Md Shahabuddin has been murdered by the DG of Tihar Jail and people who commanded him.

His counsel alleged that it was a deliberate attempt to infect with the corona virus saying that a Pakistani prisoner, who was Covid positive, has been shifted to in his high security ward. He said Shahbuddin was hale and hearty and he was locked up in a room where even a bird cannot fly.  Had not the Pakistani prisoner shifted to his room, he would not have infected the virus, he asserted.

His family members also sense something bad was done with Shahbuddin as first they were denied permission to admit him to a good private hospital like Max for treatment when his condition was very serious and then were also denied the body to be taken to his home town Siwan. His son Osma knocked on the door of the court and sought the autopsy of his father that was granted by the Court. Now the autopsy report awaited.

His supporters also smell a conspiracy in Shahbuddin’s death. They pointed out the way he was treated in jail and was not admitted to a good hospital to let him die. He was a young and healthy man, if he had got  proper treatment in time, he would have been alive today, they said.

His death has also caused panic in families of political prisoners such sach as Umar Khalid, Sharjeel Usmani, Meeran Hyder, Kahlid Saifi and others. After Shahabuddin’s death the central government has asked state governments to “earmark appropriate health facilities” for prison inmates who test positive for the coronavirus and cannot be treated at a hospital within the jail premises.

Earlier this week, the Supreme Court has directed the Uttar Pradesh government to shift journalist Siddique Kappan from Mathura Jail to a government hospital in Delhi after a plea was filed, citing that he had contracted the virus.

Family members of prisoners are scared about their loved ones after they learnt a covid positive prisoner was shifted to Shahbuddin ward.

Jailed Bahujan Samaj Party MLA Mukhtar Ansari and Samajwadi Party leader Mohammad Azam Khan have also tested positive for the virus. There are  reports of prisoners getting infected that have emerged from Chandigarh and Madurai too.