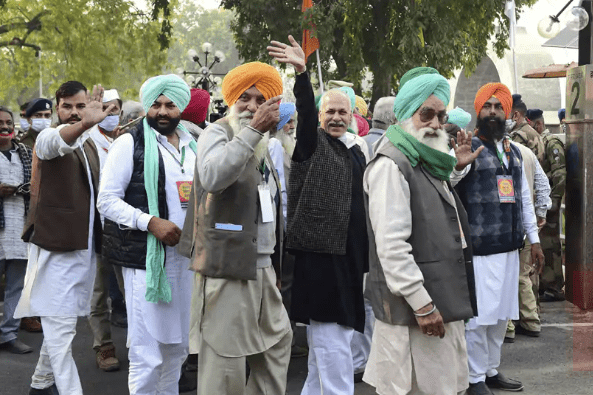 New Delhi:  As the talks failed on Tuesday with the central government, farmers’ bodies announced they will intensify ongoing protests against the three farm laws across the country.  A group of 35 farm leaders today turned down the Centre’s second pitch for a committee to discuss the contentious farm laws which met with a Ministerial delegation of the Government. They said the government proposal was not acceptable to farm unions and talks would resume on December 3.

Hanan Mollha told Muslim Mirror said the farmer leaders stuck to their demand to repeal the three Central Farm Acts and withdrawal of the Electricity Amendment Bill 2020. While the government proposed of forming a 5-member committee to look into the objections and study the concerns of the farming community. But it was rejected by the farm unions. They told the government that such Committees led to no results and outcomes in the past.

The Government also asked the farm unions for their detailed critique to be provided in the statutes, and to articulate the objections in detail. The Minister said that statutes could have deficiencies and that the government is willing to look into objections and deficiencies pointed to by the unions and considers changing the same.

“We do not accept the government’s proposal to set up a special committee. We demand that the government cancel the laws related to agrarian reform. We are not going to back down even if the government uses force. Our protest will continue,” Roop Singh, a leader of key farmers’ organisation Bhartiya Kisan Union (Ekta Ugrahan), told a news channel.

More farmers from Punjab and khaps from Haryana are making their way to the national capital, demanding that the laws be repealed. The farmers have said they will continue the protest if their demands are not accepted.

Of the 35 farm leaders 32 were from Punjab Unions and one from Haryana, and two were from national farmer alliances – AIKSCC and RKMS.

Meanwhile, more farmers from Punjab and khaps from Haryana are making their way to the national capital, demanding that the laws be repealed.

AIKSCC announced that the protests of farmers will intensify further, until their demands are met.