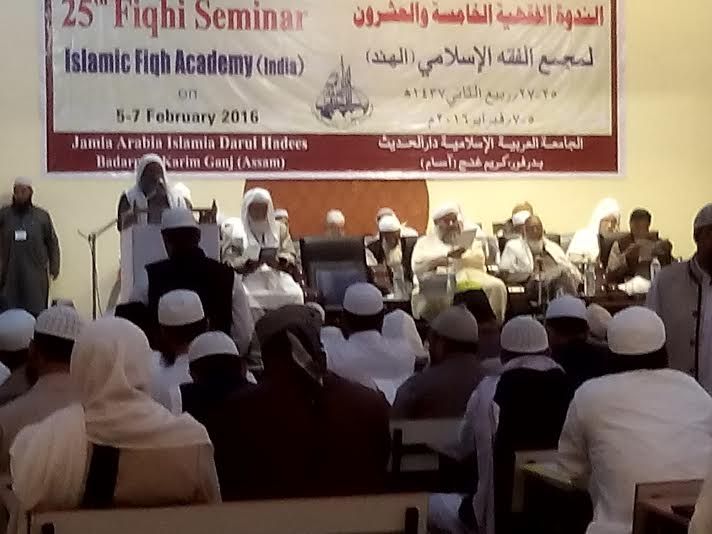 ‘Islamic state is antithesis to Islam, needs to dealt severely’

Badarpur (Assam): While condemning the militant group Islamic State (IS) in the strongest possible terms, top Islamic scholars, jurists and Ulama have described the group as the antithesis to Islam which needs to be dealt with ruthlessly. Addressing the inaugural session of Islamic Fiqh Academy India’s 25th Fiqh Seminar here on Friday, they said Ummah need to be made aware of its activities as the group was created by Western powers to balkanize the Islamic world. They also urged Muslims to start inter-faith dialogue with non-Muslim brethrens.

Delivering key-note address, Fiqh Academy General Secretary Maulana Khalid Saifullah Rehmani has sharply criticized the IS and its activities equating it with ‘Khwarjites (rebel group during the early period of Islam). He said America, Israel and other Western powers have created this group to foment sectarian strife in the heart of Islam which has ultimately been strengthening Syrian despotic ruler Bashaar-al Assad and Israel. Exhorting Muslims to stand united, he said religious leaders must take utmost care in declaring ones fellow Muslim to be a non-believer. The act of Takfir is fueling sectarian tensions and violence in Muslim societies and in the Indian sub-continent this practice is much prevalent, he added.

Maulana Rehmani also said Muslim masses have no right to raise arms against a despotic or tyrannical regime as it will create chaos and anarchy in the country. “Waging a Jihad against a ruler, who is not a good and practicing Muslim, is not allowed in Islam.

Likewise those Muslims who are living as minority like India where they enjoying democratic rights, even thinking about Jihad is a big misunderstanding about the concept of Jihad”.

Stressing need of spreading message of Islam, Maulana Rehmani said it is the duty of Ulama to educate youths how to co-exist in pluralistic and diverse societies where Muslims are in minority. Referring peace accords with unbelievers in Makkah and Medina done by the Prophet, he said these should be basis for inter-faith dialogue process with non-Muslims.

In his opening remarks, Maulana Ateeq Ahmad Bastavi, secretary Fiqh Academy, said that Academy has been making endeavors to bring Ulama and Islamic theologians on one platform to confront the challenges and issues arising out of a fast changing world and scientific and technological advancement. Since its inception in 1989, the Academy has held so far 24 seminars and resolved almost 200 issues and problems in the light of Quran and Sunnah, the Prophetic traditions, he added.

Earlier, Ameer-e- Shariat Assam and North East Region Maulana Tayyab-ur-Rehman said in his welcome address that Assam is a melting-pot of diverse cultural and religions. He also threw light on advent of Islam in this part of the country.

The 3-day seminar is being held in the historic town of Badarpur which is 310 Km away from state Capital Guwahati in the south-west.

It will deliberate upon four important issues including rights of old-age people, Talaq given in fit of rage, dialogue with non-Muslims and whether co-compatriots can be called as people of the Book etc. It is to be mentioned here that Fiqh is a science of religious jurisprudence that explores solution of contemporary issues in the light Qur’an and Sunnah. It is expected on the concluding session of the seminar, Ulama and Islamic jurists will arrive at collective decision.

More than 200 scholars, jurists, and fresh graduates of top seminaries from across India and from around the world are taking part in the deliberations.