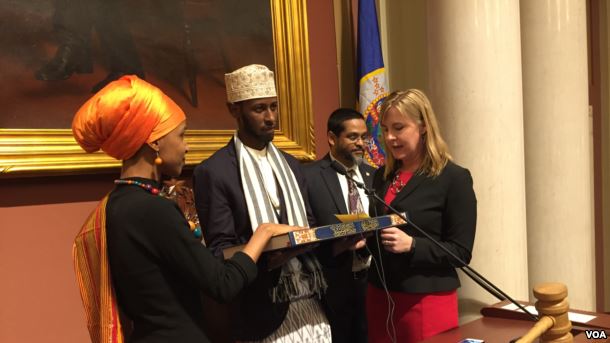 Minnesota: On Tuesday, Ilhan Omar made history in the United States when she was sworn into the Minnesota House of Representatives. She became the first female Muslim and Somali-American legislator, Mic Network reported.

Omar held the Qur’an during her swearing-in ceremony, becoming the second person to do so after Minnesota Rep. Keith Ellison, the first Muslim US congressman and a contender for Democratic National Committee chairmanship.

According to the network, the 115th Congress is the most diverse yet. Despite this, Congress is still about 80% male, around 80% white and about 8% are non-Christian.
What makes Omar’s political milestone monumental isn’t just her identities as a Muslim woman and a Somali. She is also a refugee and immigrant, who fled the Somali Civil War with her family and lived in a refugee camp in Kenya for about four years.
“The war started when I was 8,” Omar said. “One-night militia tried to break into our home, and the exterior was riddled with bullets. My family left our neighborhood, passing through dead bodies and debris.”

“I no longer had a bed of my own, the privacy of a shower in my own bathroom — we were essentially homeless,” Omar added. “I would fetch water, and my family would reward me with a shilling at the end of the day, so I would go see a movie in the village next door in a makeshift theater: a hut.”

Omar’s place in American history sends a strong and inspiring message against xenophobic bigotry. The Minnesotan representative is fully aware of this too.
“My election win offers a counter-narrative to the bigotry in the world,” she said. “This is a land of immigrants, and most come here for opportunity, a second chance. It’s our time to fight for the America we know we can have.”—AG/IINA