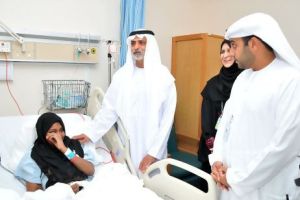 Abu Dhabi, May 5 : In a landmark surgery in the UAE, a hospital carried out a kidney transfer and transplant from a deceased donor from Saudi Arabia to a 23-year-old woman patient from Abu Dhabi.

The surgery was done at the Sheikh Khalifa Medical City (SKMC), owned and operated by the Abu Dhabi Health Services Company (SEHA).

The health of the patient, Latifa Sai’ed, who had suffered kidney problems for 16 years, is said to be improving daily. The organ is functioning normally and she is no longer on dialysis.

Latifa Sai’ed, born and raised in the UAE, suffered from a rare syndrome that resulted in kidney failure at the age of seven. She was on dialysis for 16 years ever since and endured multiple problems common to long-term dialysis patients, such as blood clots, inflammation and painful procedures such as cathertization.

Word was received that a young man died in a traffic accident in Saudi Arabia, and his family decided to donate his organs to help save the lives of those needing organ transplants.

Tests showed that Latifa was a near perfect match for the kidney and arrangements were made to rush it from Saudi Arabia to the UAE by a jet.

Al Qubaisi praised the medical team, and thanked the family of the donor for their generous and selfless act of kindness.

Sheikh Khalifa Medical City has conducted 75 kidney transplants, all from living related donors in the past. Among them were seven children, the youngest being four years old, while the oldest person was 64 years old. However, this was the first transplant from a deceased donor.