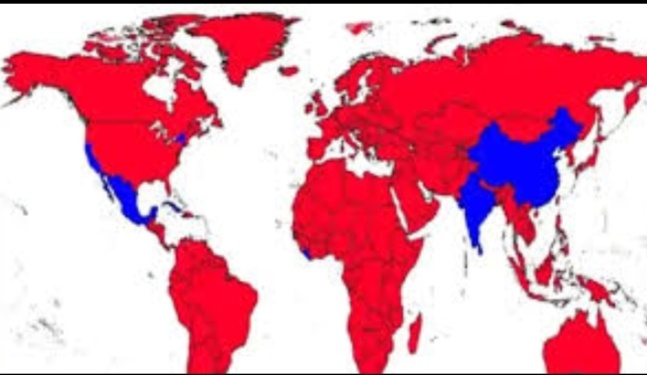 These are the dying moments of the US elections as a ‘war of attrition’ between US president Donald Trump and Joseph Biden is turning out to be, as predicted, a nail biter, and fortunes may swing either way, with Trump having already declared that the ‘transfer of power’ would not be smooth, if he loses. The world is looking at US, whose president, perhaps for the first ever, has debunked his own establishment, by calling that Pentagon and its deep state i.e. CIA is not ready to withdraw from  Afghanistan, even if at the cost of a disastrous war of 19 years.  He trashed his establishment that it bundled all the deaths as due to COVID-19, which amply shows as to how US establishment works, of course to the tune of corporate masters. Trump also has termed, what has been called as the biggest US achievement (of US Ex. president Obama)- the killing to Osama Bin Laden, as hoax-thus, leaving the world into a tizzy as to how US works to its own agenda!

The worst was yet to come, as Trump, who forced India to sign BECA, in order to put ‘China into order’ by ‘way of India’ had started to feel the rug-under-his-feet ‘slipping’ as 72% of Indo-Americans, as per NDTV on October 14, 2020 1  have been into favour of voting for Trump’s rival Biden! Biden vice president nominee is Kamala Harris, who is from an Indian origin, and in case of any eventuality i.e. Biden dies or has to step down, then the obvious step would be an Indian making to the presidential post of US. This has enraged Trump, so much so, that even before the polls results were declared, Trump Jr has released a world map, with ‘red’ being the nations in support of US and ‘blue’ being in opposition to it. Mexico, China and believe it or not India is shown in ‘blue’! To add more smirk into it-wait for the surprise! Yes, Trump Jr has shown Kashmir, as an intendment nation of both India and Pakistan!

This leaves a big question to all the lovelorn politics of Indian PM Narendra Modi who has been into US campaigning for Trump with ‘Howdy Modi’ in Houston in September 2019, shortly after he had annulled the special status of Jammu-Kashmir-Ladakh under article 370, and later ‘Namaste-Trump’ visit of Trump to Modi home state Gujarat in February 2020, to mobilise Indian voters towards Trump, have all turned to be a damp squib!

What would be more than intriguing is that when Kingdom of Saudi Arabia released a 20 Riyal Banknote, on October 24, 2020, informs XpressRiyadh 2 , to celebrate being host to G20 summit, it was without Gilgit-Baltistan (GB) as part of Pakistan, and in fact showed Kashmir to be as an independent country, towards which Pakistan could not even register a squeamish response, yet India registered a protest on October 29, 2020, tells IndiaToday 3 with India saying that the banknote was a distortion of the Indian map. But, now exactly it is the same world map, being furnished by Donald Trump Jr, that too hours before the elections results are to be announced!  Certainly, India, which is facing one of the worst war-threat from China-Pakistan, in its last 70 years, has been left in a quandary, as to have found that US is the wrong urn to have been spun, as the world powers want Kashmir to be independent of both India and Pakistan. Wonder, then, what Modi has got after all these years?

The Trump Jr map shows Pakistan in ‘red’ meaning ‘in support of Trump Sr’ which is quite contrary as Pakistan is loathed by Trump and US establishment alike, for Pakistan did not let US to ‘sell-off’ its weapons to India, after ‘vacating’ from Afghanistan and US had to incur an amount of ‘triple their cost’ on their transportation alone. Here, it leaves a question? Will Modi or his battery of ministers make India register the same response with US, as it did with KSA, after Kashmir has been annulled from India too? As it becomes clear that KSA did what had been dictated to it by US.

Gilgit-Baltistan is now to be made Pakistan fifth-province, on the lines which were suggested by China, as it is China’s gateway to its life-line project China Pakistan Economic Corridor (CPEC) and very ironically, when India had started to air GB weather-report on May 9, 2020 4 , according to TOI , it led to a backlash from China in Ladakh in which India lost its 20 soldiers on June 15, 2020, as China perceived the Indian move to finally attack CPEC . The latest move from Trump Jr throws back the obvious cardinal question. Has Pakistan already sold-off its side of Kashmir? And, what would now be the Indian policy vis-a-vis US which ultimately want Kashmir to be a sovereign nation, to make it its military base in order to thwart China for the times to come. Modi, has certainly made India be  ‘caught-on-the-wrong-foot’, as US is set to steer clear of Indian position on Kashmir, and the worse, is that India has in-the-middle-already lost its 70 years old friend-Russia.

How will ‘blue’ China, as shown in the map respond, along with ‘blue’ India (sic) is only time would tell, as China will make moves to blunt US manoeuvres over GB and the next years would find this new-game unfolding, with Russia on the side of China and may be India scurrying for its new ‘place’ as Kashmir is now into the hands of world-powers!

If Trump looses, then, the move of Trump Jr will be a constant ‘reminder’ of the Republicans position on Kashmir which perhaps Democrats will find it too hard to put into favour of India?

“Have right to raise voice for Muslims in Kashmir” : Taliban

Kashmiri requires a political solution and not a military one : Lieutenant General (Retd) Rameshwar Roy