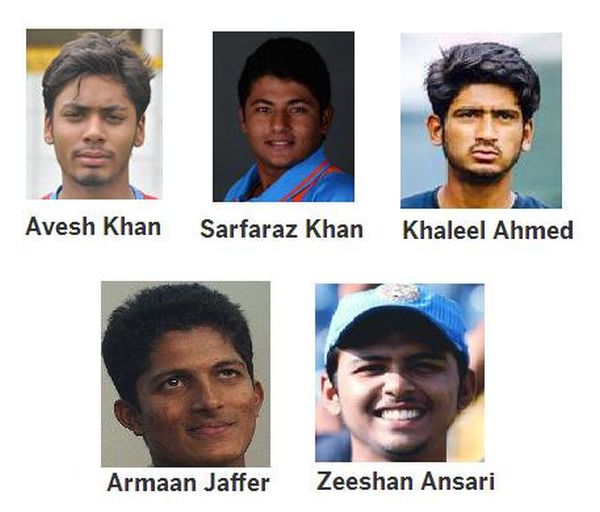 New Delhi : For the first time in the history of Indian cricket, five Muslim cricket players have been selected to represent India at International Cricket Council (ICC) Under 19 cricket World Cup 2016 in Bangladesh underway from 27 Jan. The name of these five players are Arman Jaffer, 17, Sarfaraz Khan, 18, Avesh Khan, 19, Khaleel Ahmed, 18 and Zeeshan Ansari, 16.

It may be noted that there were only three Muslims in Indian team that played Under 19 cricket World Cup 2014 in UAE.

Sarfaraz khan,the most prominent among these five,has performed well even in 2014 Under 19 world cup played in UAE. His consistence performance has earned his name in Royal Challenger Bangalore (RCB) and he was paid for Rs 50 lakh in the Indian Premier League (IPL) auction in 2015 where he showed superb batting that gave him more recognition.

At a very young age of 12, Sarfaraz from Mumbaigot noticed when he scored a magnificent 439 in his maiden Haris Shield game in 2009. His father is a coach who has mentored players like Iqbal Abdullah and Kamran khan.

Another player, Armaan Jaffer is nephew of well known Test cricketer Wasim Jaffer. He also lives in Mumbai and is a class fellow of Sarfaraz. He created history in U-19 tournaments when he scored back to back three consecutive double centuries.

Avesh Khan, the other member of the squad,who hails from Indore, MP is a brilliant fast bowler. He created are cord of his own when bowled a delivery with 139.8 kmph against arch rival Pakistan in the last Under-19 World Cup played in UAE.

Zeeshan Ansari from Lucknow is a spinner and is known for throwing leg break googly. His father, Naeem Ansari is a tailor and specialises in Ladies Suit & Salwar.

Khaleel Ahmed, a left arm seamer is from Tonk, Rajasthan.He picked up 26 wickets in four matches in the under-14 Rajsingh Dungarpur Trophy.His 26 wicket haul got him selected for a camp at the BCCI Specialist Academy in Mohali. His father Khurshid Ahmed is a nurse in a village near Tonk, Rajasthan.

Azharuddin advice for free as son gets into Goa team: Official