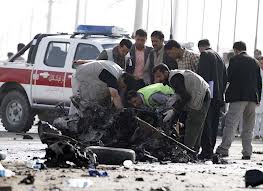 The US drone fired two missiles at a house located in the Babar Ghar village in the Wana district of South Waziristan, Pakistan’s restive tribal region bordering Afghanistan, reported Xinhua.

Locals rushed to the site for rescue work, and a rise in causalities was feared as some people were still buried under the debris.

Media reports claimed that the compound was being used by the members of the banned militant organisation Tehreek-e-Taliban Pakistan.

Wednesday’s strike was the second of its kind in the current month. On April 14, an unmanned US plane targeted a house in North Waziristan and killed four people inside.—IANS.