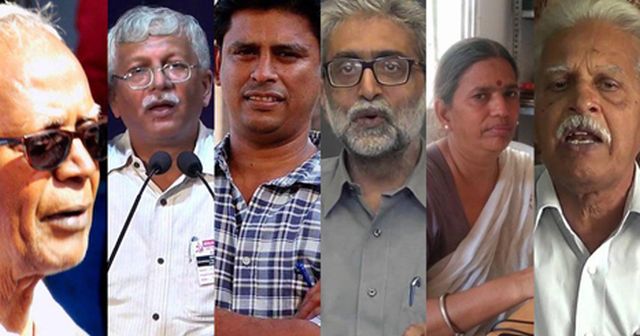 Besides, other activists across the country including Kranti, Stan Swami and Anand Teltumbde were raided in the major operation that is part of the ongoing probe into the involvement of Maoist supporters into the Koregaon-Bhima riots of January 1 this year.

In a related development, the Delhi High Court directed Maharashtra Police not to take Navlakha out of Delhi till Wednesday and keep him under house arrest till further orders.

The court directive came on a habeas corpus petition filed by Navlakha’s counsel seeking to know his whereabouts. The police told the court that they had already got transit remand of the accused from a magistrate.

Scores of supporters of these activists staged noisy protests during the police raids at various locations, including in Mumbai and Thane.

The arrests also evoked condemnation from other activists and former bureaucrats who expressed shock over the raids on the homes of intellectuals and activists critical of the BJP.

They called it an attempt to strike terror among those fighting for justice for the marginalised.

Among the angles being probed after Tuesday’s crackdown are the modus operandi of the activists, their sources of finance and modes of funding of their activities, their suspected connections with like-minded groups and related issues, officials indicated.

Bharipa Bahujan Mahasangh (BBM) President Prakash Ambedkar called it an attempt by the government to “silence the masses” in the wake of the recent crackdown on the Hindu rightwing group Sanatan Sanstha.

“But now NGOs which are non-political will become more active and aggressive than they were earlier in opposing this (BJP) government in order to safeguard democracy and human rights,” warned Ambedkar, the grandson of B.R. Ambedkar.

Officials described Tuesday’s operations as a follow-up to similar action taken on April 17 when the Pune Police swooped on over half a dozen Dalit activists and those involved with the Kabir Kala Manch, which organised an Elgar Conference in Pune on December 31.

The next day, on January 1, caste riots erupted in Koregaon-Bhima which left one person dead, culminating in a Maharashtra shutdown on January 3 called by the Bharipa Bahujan Mahasangh of Prakash Ambedkar.

After nearly five months, Pune Police teams fanned out in around half a dozen states and raided the homes and offices of several persons who are suspected to be linked with the Elgar Conference or are considered as Maoist supporters.

The police have seized items like computers, laptops, CDs, pen-drives, ‘incriminating documents’ and books from them and contended that they functioned like an ‘urban think tank’ for Maoists.

Those arrested were charged under the Unlawful Activities (Prevention) Act and the Indian Penal Code.