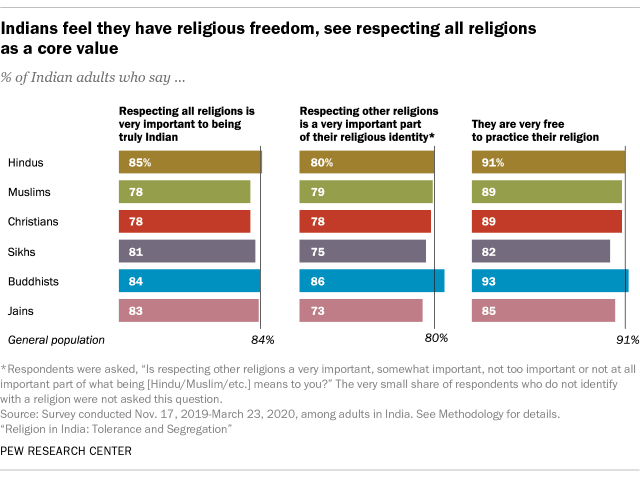 NEW DELHI: In a resounding endorsement of India’s enduring secular values, an extensive report has found that most Indians respect all religions as it is “very important to being truly Indian” and they are all free to practice their religions.

“Tolerance is a religious as well as civic value: Indians are united in the view that respecting other religions is a very important part of what it means to be a member of their own religious community,” said the report by the US-based Pew Research Center that was based on face-to-face interviews with nearly 30,000 Indians.

“Indians generally feel their country has lived up to one of its post-independence ideals: a society where followers of many religions can live and practice freely,” the report released on Tuesday said.

Eighty-five per cent of Hindus and 78 per cent of both Muslims and Christians agreed with the view that respect for all religions is integral to being Indian, it said.

The report said there was overwhelming support for the view that “respecting other religions is a very important part of their own religious identity”.

The belief that they were “very free” to practice their religion found tremendous support across religions, with 91 per cent of Hindus, 89 per cent of both Muslims and Christians and 82 per cent of Sikhs endorsing it.

Pew Research Center, one of the foremost think tanks and polling organisations on religion and society, said that it conducted the interviews in 17 languages across India between late 2019 and before the Covid-19 pandemic struck the next year.

Its report based on the polling covers religious beliefs, politics and social issues and summaries of the report were also issued in Hindi and Tamil.

But in a discordant note, the report found that for many Hindus, being of the Hindu faith and speaking Hindi were essential to being “truly Indian”.

However, 65 per cent of the Hindus who hold those beliefs and voted for the BJP also said that religious diversity was good for the country.

It said that for 64 per cent of Hindus to be truly Indian one had to belong to the religion and for 59 per cent speaking Hindi was essential.

There were wide divergences regarding the Partition of India, according to the report: 66 per cent of Sikhs and 48 per cent of Muslims considered it “bad”, while only 37 per cent of Hindus and 30 per cent of Christians shared the view.

In a sign of weakening caste barriers, Pew said that most Indians, 72 per cent, from other castes said that they would be willing to have a Dalit as a neighbour.

The report also included the non-sequitur that members of various religions saw themselves as different from adherents of other religions: 66 per cent of Hindus see themselves as “very different” from Muslims who reciprocate the perception by 64 per cent.

But it also said that certain religious beliefs were shared by many people across the religious divide irrespective of their dogma.

There was significant acceptance of rebirth, by 27 per cent of Muslims and 29 per cent of Christians, it said.

“While these may seem like theological contradictions, for many Indians, calling oneself a Muslim or a Christian does not preclude believing in karma or reincarnation – beliefs that do not have a traditional, doctrinal basis in Islam or Christianity,” Pew said.

When it comes to marriages, there is still strong opposition to alliances across religious and caste lines.

Among Sikhs, 59 per cent were for stopping inter-religious marriages of their women and 58 per cent for their men, the report said.

Only 37 per cent of Christians were against women of their religion marrying members of other religions, and 35 per cent when it came to men having inter-religious marriages, it said.

When it comes to inter-caste marriages, a majority of Hindus, Muslims, Sikhs and Jains consider stopping them for both men and women a high priority, Pew reported.

Overall, 64 per cent of Indians said it is “very important” to stop women in their community from marrying into other castes, while it was 62 per cent when it came to men, the report said, adding that “nearly identical shares” of Dalits and other caste members said that stopping inter-caste marriages is “very important”.

The report said that in the 2019 national elections, 60 per cent of Hindus who subscribed to the view that it was “very important” to be Hindu and to speak Hindi to be truly Indian voted for the BJP, compared to only a third of Hindu voters who felt less strongly about both these aspects of national identity.

The report, however, found very large differences between regions on these view of Indianess.

In the Central Indian states of Uttarkhand, Uttar Pradesh, Madhya Pradesh and Chhatisgarh, 83 per cent of Hindus considered being Hindu was very important to being truly Indian; while in the South the corresponding figure was 42 per cent, and 87 of Hindus in Central India gave that degree of importance to speaking Hindi, while in the South the comparable percentage was only 27 per cent.

Pew said that conversions have not had an impact on the religious composition of India and attributed the changes to differing fertility rates among religious groups.

To buttress this argument, it asserted that 81.6 per cent of Hindus said that they were raised as Hindus and a nearly identical 81.7 per cent said they were still Hindus.

It said that 84 per cent of Hindus and Sikhs considered religion very important in their lives, while 91 per cent of Muslims and 76 per cent of Christians said so.

Shiva was the manifestation of Hindu deity who was most popular as the one Hindus feel close to, it said.

Forty-four per cent of Hindus said that they felt close to Shiva, while 35 per cent said it was Hanuman, and Ganesha 32 per cent, Pew reported.

In Central India, however, 27 per cent said Ram was the divinity they felt close to, and in the North-East said it was Krishna, the report said. — IANS