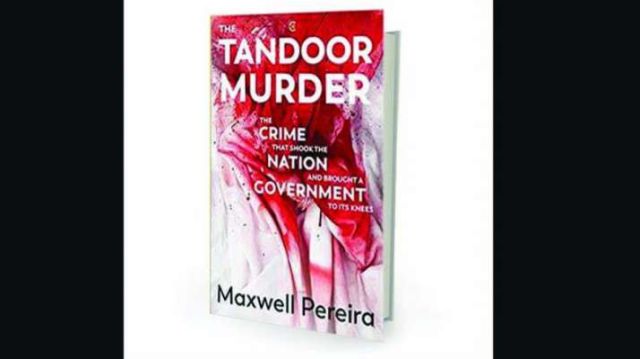 A human body chopped into pieces and thrown into a tandoor. A bonfire as the makeshift funeral pyre of a woman. A fire in a restaurant kitchen that metamorphosed into a murder investigation.

This seems straight out of a fictional thriller, but is a real-life incident. Crime stories surface every now and then, unsettlling people — but they are very soon relegated to the background. However, some have not only instilled fear in our minds but have also been etched in the annals of the cruellest and most spine-chilling crimes of India.

“The Tandoor Murder” by Maxwell Pereira recounts the incidents and the happenings around Naina Sahni murder case of 1995 — right from the night of the killing till the verdict in the case was finally delivered, almost two decades later.

Congress worker Naina Sahni was murdered late on July 2, 1995. Her husband and Congress leader Sushil Sharma shot her, chopped up her body and tried to dispose it off in the tandoor of a restaurant.

A constable, Abdul Nazir Kunju, saw fire leaping from the Bagiya Barbeque restaurant in Ashok Yatri Niwas on Ashoka Road in central Delhi and discovered her body in the burning tandoor.

What transpired next on the night of the murder? How did the accused, Sushil Sharma, manage to stave off conviction for close to a decade? What were the twists and turns in the case? How did the investigation manage to stay the course? How did the tandoor murder case affect the then ruling Congress party?

Pereira gives an insider’s account of the events based on his personal notes and investigation reports. His book is a nail-biting read — as intriguing as novels by Stephen King and Agatha Christie — mainly because of the hair-raising series of events that are unveiled for the readers.

A page-turner of a book, Pereira has carefully delineated nuggets of information as he lets us witness how the policing and political systems work in our country. His depiction of the incidents transports the reader to that time.

Pereira emphasises that in the political arena, the murder was extensively exploited by the opposition. The main accused in the case was a prominent figure of the ruling Congress party and it drew ire. The opposition expressed its outrage over the offence and cautioned against attempts to “draw a pardah over the crime”.

The publicity the case garnered couldn’t have come at a worse time for the Congress. The general elections were nine months away and the Congress, predictably, lost.

In Pereira’s words, the “imbroglio in the wake of the Naina Sahni killing helped bring down India’s national government and humbled the country’s dominant political party”.

Sushil Sharma is undergoing a life term in Delhi’s Tihar Jail. The Supreme Court had commuted to life imprisonment the death penalty awarded to him by a trial court in 2003 and upheld by the Delhi High Court in 2007.

The Supreme Court, while reducing the death sentence, had said that “life imprisonment is for the whole of remaining life of Sharma subject to remission granted by the appropriate government under the Code of Criminal Procedure”.

Why was the book so long in coming? Pereira said he had been approached earlier by a publisher but didn’t want to write till the last word was said on the subject — which the Supreme Court did in 2013.

(Ananya Das can be contacted at ananya.d@ians.in)