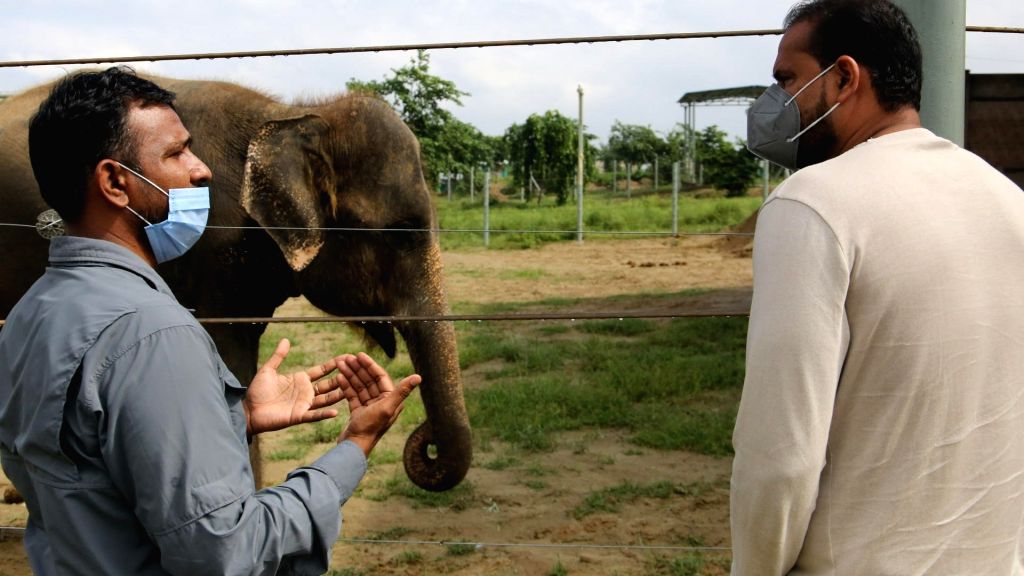 Returning for the third time, the former cricketer, who’s also an avid animal lover, kicked off his visit at Wildlife SOS’s Elephant Conservation and Care Center (ECCC). Delving deeper into the world of wildlife conservation, Pathan spent time interacting with the Wildlife SOS staff over lunch before moving to the Elephant Hospital campus adjacent to ECCC.

At the Elephant Hospital campus, Pathan was amazed to see the growth Wildlife SOS has achieved since his last visit in 2017. He was taken to the newly-installed hydrotherapy pool that helps injured elephants cope with pain and heal their muscles.

Wildlife SOS Deputy Director (Veterinary Services), Illayaraja, gave Pathan a glimpse into the formidable task of caring for injured, sick, or geriatric rescued elephants. He introduced Pathan to the blind elephant Nina, who was rescued this year, and walked the cricketer through all her medical procedures.

Pathan was also taken to the enclosure of some of the resident elephants like Zara, who was rescued in 2020 as a begging elephant.

On his way out, Pathan signed caps and pictures for the Wildlife SOS staff, who were happy to see him return there.

Established in 2010, Wildlife SOS Elephant Conservation and Care Centre is a first-of-its-kind facility. With state-of-the-art veterinary facilities, the centre is providing treatment to over 25 elephants rescued from illegal captivity and circuses.

Adjacent to the centre is the Elephant Hospital campus. The first elephant hospital to be established in India, the facility provides multifarious support structures to care for injured, sick or geriatric elephants.

Pathan said, “I have been following Wildlife SOS for the last 15 years. This was my third visit to the centre. I had visited for the first time when Wildlife SOS had just started it. It has developed immensely since then. It was great to see new developments like the elephant enclosure expansion and the great care provided to the elephants at the hospital.”

Kartick Satyanarayan of Wildlife SOS said, “Yusuf Pathan has been a dedicated wildlife warrior, supporting our work consistently through the years. His support for wildlife conservation helps in sending a positive message to the public about the need to conserve and protect wild animals.”

Baiju Raj M.V, Director (Conservation Projects), Wildlife SOS, said, “Wildlife SOS is committed to creating a world where humans live in harmony with wild animals. Our Elephant Conservation and Care Centre and Elephant Hospital ensure that these majestic pachyderms live a life of dignity and freedom. Having Yusuf Pathan support our cause gives us the motivation to continue fighting for the conservation of elephants.”-IANS