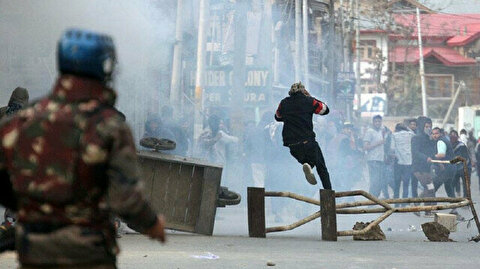 ISLAMABAD:  Some former EU politicians, along with human rights experts, have expressed solidarity with the Kashmiri people, urging the international community to take immediate action to address the alarming human rights situation in the Indian-administered Muslim-majority valley.

Speaking at an online conference late Tuesday, organized by the think tank Islamabad Institute of Conflict Resolution (IICR), in collaboration with the international NGO World Kashmir Freedom Movement, the speakers criticized the use of force against civilians in the Indian-administered Kashmir.

On Aug. 5, 2019, the Indian government stripped Jammu and Kashmir of its autonomous status and divided it into two centrally ruled territories.

Supporting the resistance of the Kashmiri people, Julia Ward, a former member of the European Parliament, noted that when a government takes away the rights of people, they have the right to resist.

“I would be resisting against people taking away my rights,” she said.

Criticizing Indian Prime Minister Narendra Modi, Ward added that he is responsible for the current situation in Kashmir and other parts of India, saying: “I don’t have a quarrel with the Indian people, and I think it’s very important that we’re having these discussions we are absolutely clear about who is responsible for this and who is perpetrating this, and (that) is the Indian government is particularly Narendra Modi and the BJP party.”

Prominent British historian and writer Victoria Schofield on her part said: “We should not give up on Kashmir although the tragedy of Kashmir has passed on generations.”

“It is imperative to forgo the blame game and come to a resolution which is humane and gives people their due rights,” Schofield stressed.

She also highlighted that human rights abuses by the Indian government should be criticized rather than presenting the Indian state as a huge economic market.

Danielle Khan, the dean of John Hopkins School of Advanced International Studies of the US, also hit out at New Delhi for the detention of Kashmiris following August 2019 actions and urged the US to pressure and compel India to negotiate the Kashmir issue on the table.

“Indian forces are involved in severe human rights abuses in Kashmir and it will continue to happen if conflict resolution is not achieved,” Khan said.

Phil Benion, a former member of the EU Parliament and vice chair of the Liberal Human Rights Committee, in his video message also showed solidarity with Kashmiris and said “the international community was not sufficiently pressing India” to refrain from taking illegal actions and committing human rights violations in Kashmir.

He urged the international community, the US, and UK to pressurize India to stop human rights abuses in Kashmir

Sabah Aslam, the chief executive of the IICR, and Fahim Kayani, the head of Tehreek-e-Kashmir in the UK also addressed the conference.

“The people of this region (Jammu and Kashmir) have faced seven decades of extreme human rights abuses, multiple crimes that amounted to acts of genocide, and India’s own involvement in terrorist activities that have targeted this region,” said Lee Rhiannon, a former Australian senator.

“I wish to pay tribute to local Kashmiris, journalists, and local activists who over the past two years have stepped up their protest, and their resistance. Sadly, many have died. So, many have suffered and I believe we have the responsibility to publicly stand with the people of Kashmir,” she added.

Muslim-majority Kashmir has been the main ingredient in the long-simmering rivalry between Pakistan and India since the two nuclear-armed neighbors gained independence from the British Empire in 1947.

The picturesque Himalayan valley is held by the two countries in parts and claimed by both in full. Since 1947, the two neighbors have fought three wars, two of them over Kashmir.

Some Kashmiri groups in Jammu and Kashmir have been fighting against the Indian rule for independence or unification with neighboring Pakistan.

According to several human rights organizations, thousands of people have been killed and tortured in the conflict in the region since 1989.

Already heightened tensions between the two countries touched a further low after India stripped the longstanding semi-autonomous status of the valley in August 2019, prompting Islamabad to downgrade diplomatic relation with New Delhi and suspend bilateral trade.-AA