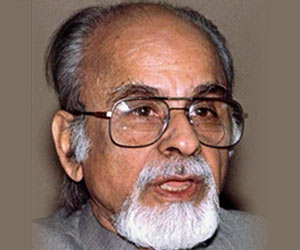 New Delhi: Former Prime Minister of India Inder Kumar Gujral died at the age of 92 here on Friday. He was on ventilator for couple of days but was ailing for a long time. Gujral had headed the United Front government for 11 months from April 1997 to March 1998. He was India’s 12th Prime Minister. Gujral was India’s external affairs minister during the 1991 Gulf War.

Born on December 4, 1919 in Jhelum (now in Pakistan), Gujral joined the freedom struggle at the age of 11 and was jailed during the Quit India Movement in 1942. He earned prominence for the Gujral Doctrine, a guide to India’s policy viz-a-vis its neighbors, particularly Pakistan. He was a writer and commentator on national and international affairs as well as theatre.

Gujral breathed his last at 3.31 PM at Medanta Hospital in Gurgaon near New Delhi.

Gujral was one of the great admires of Urdu. He himself had strong grip on the Urdu language and literature.