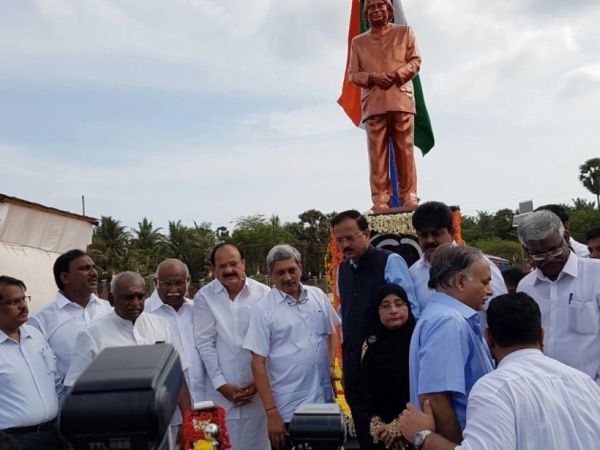 Rameswaram (Tamil Nadu), July 27 : On the first death anniversary of former President A. P. J. Abdul Kalam, the foundation stone for building a national memorial was laid at his burial site Pei Karumbu here on Wednesday.

Defence Minister Manohar Parrikar, while laying down the stone, said the construction work would begin soon and the memorial will be built in record time.

Rameswaram is around 600 km from Chennai.

Union Minister for Urban Development and Information and Broadcasting, M. Venkaiah Naidu and Minister of State for Road Transport and Highways and Shipping Pon Radhakrishnan and other ministers from the Tamil Nadu government also participated in the event.

A bronze life-size statue of Kalam was also unveiled at the venue.

Naidu said the memorial will be akin to a mosque, a temple and a church.

“It is to tell the future generation that such a great person was born in this pious land,” Naidu said.

Kalam passed away on July 27, 2015 due to cardiac arrest while delivering a lecture at IIM-Shillong.—IANS