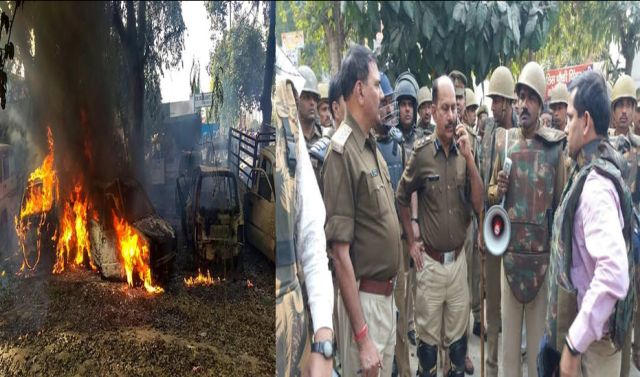 Lucknow/Bulandshahr : Four people have been arrested in connection with the killing of Inspector Subodh Kumar Singh and a young man in violence in Bulandshahr in Uttar Pradesh after cow vigilantes went on a rampage, police said on Tuesday.

The police, however, maintained it would be too early to conclude about the involvement of any organisation in the violence although local officials linked the mayhem to rightwing Hindu groups.

The police said the main conspirator behind Monday’s mob violence was Yogesh Raj, who is on the run and is said to be a Bajrang Dal activist.

Additional Director General (Law and Order) Anand Kumar said those arrested were Chaman, Devendra, Ashish Chouhan and Satish, who have been named in the FIR, while the prime suspect was Yogesh Raj.

“Those arrested have been found to be leading the crowd after being identified in a video. About 40-50 others who are unidentified were involved in the incident and police is confident of identifying them with the video evidence,” he said.

The official parried questions about the political links of the three key accused who are also said to include an activist each from the BJP and the Vishwa Hindu Parishad.

“Yes, Yogesh Raj is the main conspirator,” he said, adding that he was yet to be arrested.

He said six teams have been formed to probe the incident and an SIT has been constituted to investigate the matter.

On allegations that policemen fled the spot leaving the slain Inspector alone, Kumar said the circumstances in which police personnel left the place would be analysed and till then no action would be taken against anyone.

He said the Inspector was first injured by a stone.

“He fell unconscious and was taken in a vehicle which was attacked by a mob with stones and gunfire,” he added. Videos which went viral showed the Inspector dead with a bullet wound near the vehicle and several activists running around in circles.

A .32 bore bullet was found lodged in the head of Subodh Kumar Singh.

Earlier reports said the Inspector was killed when he tried to reason with the Hindutva activists blocking a busy road with carcasses of animals they claimed were of cows.

About the death of the youth, Sumeet, only a probe can reveal whether he was killed in cross-firing or police firing, Kumar said.

He said a bullet had been recovered from the body of Sumit.

The officer said the dead officer being treated as a “martyr” and full state honour was given to him in Meerut in the presence of the police brass.

The body was taken to his village in Etah where he would be cremated with full honours.

In his village, his family broke down on seeing the mortal remains. His wife rued that he had sought leave but it was not granted. If he had been given leave, he would have been alive, she said.

His two teenage sons paid glowing tributes to their father, saying he never discriminated people on the basis of religion.

The officer’s elder son Shreya is studying MBA while his younger son Abhishek is a student of engineering.

The uncle of the dead Inspector said the family won’t accept the compensation of Rs 40 lakh announced by the government and instead wanted the presence of Chief Minister Yogi Adityanath in the village.

The government has formed a special investigation team (SIT) to probe the violence, the circumstances leading to it and to identify the people and groups involved.

Meanwhile, Bahujan Samaj Party (BSP) chief Mayawati blamed the state government for the violence in Bulandshahr, saying the “lawlessness” in the state was a result of its “faulty and wrong policies”.

In a statement, the four-time Chief Minister said that government was now faced with the same mobocracy it inculcated to make political gains over the past many years.