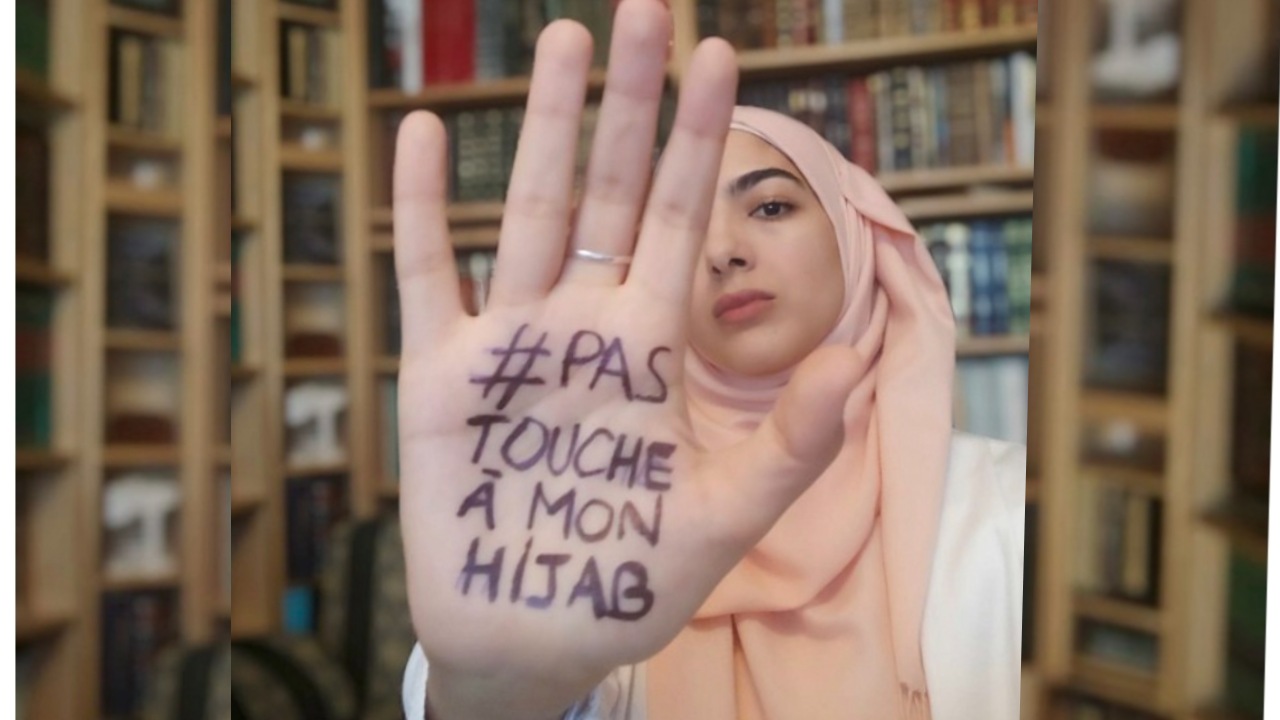 During recent debate over a French bill many charge is Islamophobic, the way the bill in particular targeted the wearing of hijabs came under fierce criticism, especially from the women who say choosing how they dress is their God-given right.

The bill would ban mothers from wearing hijabs (headscarves) while accompanying their children on school trips, prohibit the wearing of coverup burkinis (full-body swimwear) in public pools, and ban minor girls from concealing their face or wearing religious symbols in the public space.

In the face of these legal challenges, a number of French women started a “don’t touch my hijab” movement on social media.

Duygu Akin, who started the movement with other French Muslim women, spoke with Anadolu Agency about Islamophobic attitudes and laws in her country.

‘Hijabs always made into an issue’

Akin, 25, a French Muslim woman who wears a headscarf, is set to enter the business world armed with a forthcoming master’s degree in finance.

Akin, who lives in Strasbourg, said hijabs in France have long been made a subject of controversy, and have been brought up again and again.

After a British social media influencer showed her opposition to France’s hijab bans by writing “hands off my hijab” on her own hands, Akin and her friends decided to take action and translated the phrase into French.

We wrote #pastoucheamonhijab [Don’t touch my hijab] on our hands and posted pictures on social media. With the support of those who saw our message, our movement expanded to the media,” she said.

Akin said the movement got a very good response both in France and abroad.

“Even some journalists reacted with astonishment over how hijabs are such a big issue in France even during the COVID-19 pandemic.”

Wearing a hijab during education faces many challenges in France, said Akin, adding that high schools prohibit it.

“Although only public companies have (overt) bans on hijabs, many private companies don’t hire women who wear headscarves. This is precisely because there is a bad perception of hijabs in France,” said Akin.

While the French media aired serious allegations about women who wear headscarves, they were never given a voice, she added, saying: “Together with my friends, we fought for our own voice, we found it ourselves.”

“In France, choosing and practicing a religion is a fundamental freedom and our right. These bans are completely against our freedoms. We, citizens of France who wear hijabs, demand our freedoms, which are our rights,” said Akin.

Akin said that France has been urging women to take off hijabs and “get their freedom” since the colonial period in Algeria.

Stating that people in cities such as Strasbourg with a large Muslim population are more accustomed to living together and respect each other, Akin added: “In some regions where there are no Muslims, the French are very prejudiced against Muslims. This is only because they learn about Islam from the media.”

Akin said that she and her friends taking part in the PasToucheAMonHijab movement started to write letters to members of parliament to express their opposition to headscarf bans and seek their support.

“Our primary current goal is blocking this bill,” she explained.

“Of course, this isn’t enough, because we want to prevent headscarves from constantly being made into an issue. Even if the bill isn’t passed, the fact that headscarves are always on the agenda causes a bad perception in people’s minds. We want to fight this too.”

We want to be known for our professions’

Akin said she was surprised by the fight against hijabs in France, which many around the world see as “the country of freedom and equality.”

“I really feel very sad because we’re French citizens who were brought up in France, and it’s very sad that the state ignores us and alienates us,” she explained.

“We make our contributions to this society, we have roles in social life. We don’t just want to be used in the media when there’s a problem.”

For the first time, Muslim women wearing hijabs found their voice, the right to speak out on an issue that affects them the most, something they did not have before, Akin said.