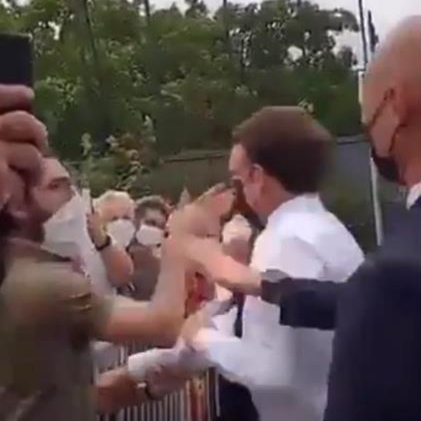 Paris: Visiting southeastern France on Tuesday, President Emmanuel Macron was slapped by a member of the public, and two people have been arrested, local media reported.

The incident took place in the afternoon as Macron was greeting a crowd during an official visit to the Drome region – the second stage of his “tour de France of the territories” since the end of a COVID-19 lockdown and in the runup to June 20 regional elections.

In a video posted on Twitter by a user called AlexPLille, Macron can be seen surrounded by personal security and gendarmerie forces while jogging up to a crowd behind a steel barrier. Across the barrier, a masked man dressed in a green t-shirt grips Macron’s arm and then slaps him across the face.

The scene was reminiscent of a notorious 2008 incident when an Iraqi journalist threw a shoe at then-US President George W. Bush.

BFMTV reported that two people were arrested over the incident.

Condemning the incident in the National Assembly, Prime Minister Jean Castex said: “Democracy is debate, dialogue, confrontation of ideas, expression of discord. This is legitimate but it can’t be violence, verbal aggression, or physical aggression. I am calling for the revival of the republic, we are all concerned about the fundamentals of our democracy.”

An hour before the incident, Macron posted on Twitter from Drome that he could see “how much is expected” by the people from the lifting of the lockdown.

“Tomorrow, a new step will be taken. Here, in a hotel school in Drome, like everywhere in France, I can see how much is expected. It is life that will resume in all our territories! It is part of our culture, of our art of living, that we are going to rediscover.

During his presidency, Macron has been dogged by months of mass protests of the Yellow Vest movement against his rule.