The chilling video of 29 seconds, on October 3, in which farmers are shown walking and from behind a cavalcade of SUVs runs over them, killing 4 instantly, is an example of what BJP considers for law, as BJP MP from Lakhimpur (UP) and MoS for Home Affairs Ajay Mishra’s son Ashish Mishra had allegedly mauled the innocent farmers! This killing happened when UP Deputy CM Keshav Prasad Maurya was to attend a function.

This had come when Ajay Mishra had earlier openly threatened the protesting farmers ‘be settled in two-minutes’ and that they would be forced not only out from Lakhimpur Kheri but from Palia too. Distance between Lakhimpur and Palia is about 76 kms. Ajay Misra is the only Brahmin face as a minister from UP in PM Narendra Modi government.

The UP police and mainstream media acted hand-in-hand and there was every effort to anyhow deflect the arrest of Ashish Mishra, which did not happen for the next six-days, but for the intervention of Supreme Court, which sought the status-report, and therefore, Ashish Mishra, had to return from Nepal to surrender on October 9, after his medical check-up got done. Ashish Mishra is accused of murder, which is one of the most heinous crimes, but his father, who boasted to ‘resign’ if his son was involved in the murder, had got the strings dotted-on-line, as witnesses forwarded a theory that Ashish Mishra was not involved in ‘mauling’ but was present at a Dangal (wrestling show) on a distant place. Media started to willy-nilly the theory to bail-out accusations against Ashish Mishra. Four other persons were also killed, in a reaction to farmer’s killing, including the driver of Ajay Mishra and a journalist. 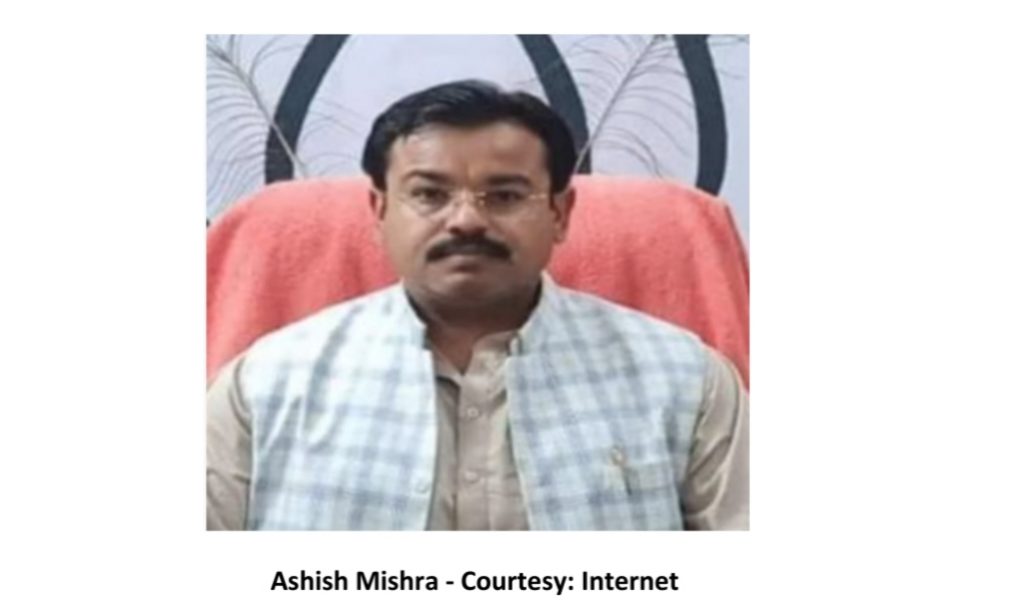 For the next 12 hours, the UP police interrogated Ashish Mishra and later disclosed to officially have arrested him. This arrest could come only when SC had a baton in hand, or else the biggest accused of this mass-murder was never to have been accosted so early. He has been sent to judicial custody for 14 days. Police have found CCTV footage which has shown the accused to have gone to the site of incident and he could not prove to police that he was on a different site watching the wrestling match. No sooner he was arrested that BJP started to play the Brahmin card, as the advisor to UP CM Shalabh Mani Tripathi released a statement saying that only court would decide ‘if Ashish Mishra ‘Monu’ was guilty or not’, but it will not be forgotten the way political parties targeted Brahmins in the wake of this incident. Ashish Mishra is also an aspirant of BJP ticket in the next 2022 elections. 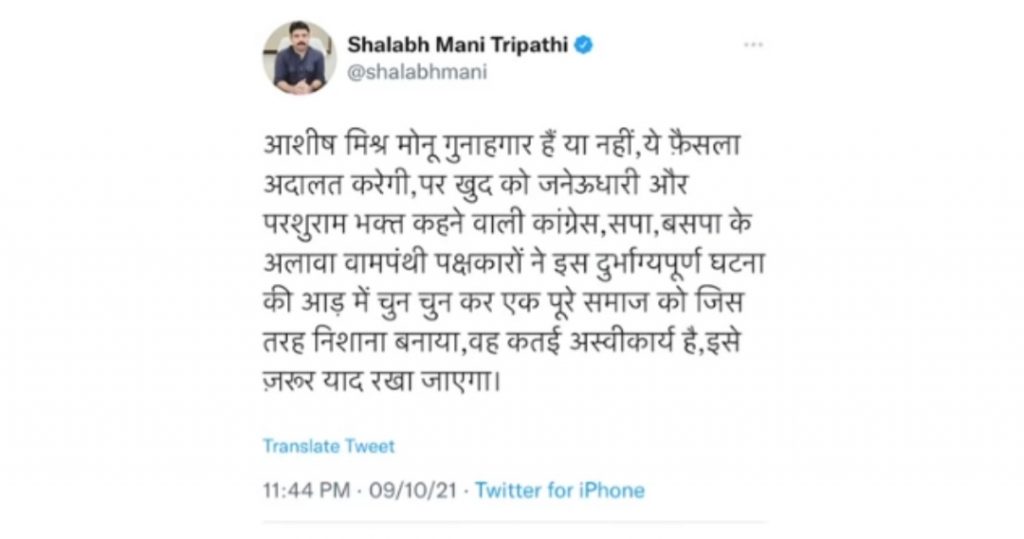 The big question is will there be a non-partisan investigation into this heinous genocide? Perhaps, it does not seem to be possible, until Ajay Mishra holds the high-profile ministerial portfolio, as after all, the entire police paraphernalia is just ‘under his thumb’ and until he resigns from his rank, his son would continue to avail a VIP treatment even when behind the bars. What would merit, a yet another shameful event, is while Ashish Mishra non-cooperated with police for 12 hours, he was instead provided ‘refreshments’ for nine times! Here, it is also worthy to recollect UP CM Ajay Singh Bisht favourite strategy i.e. to bulldoze the properties of absconding criminals, but all came to an abrupt halt as this time it concerned his own party. Why could not he order the same? What made him numb in his knees? Jayant Chaudhry, RLD Chief also took a jibe on it.

The gruesome killing of farmers, has therefore, triggered a nation-wide campaign against BJP, which is quite natural as farmers against the three black-laws have been protesting from the past around 12 months now , and have experienced an extreme raw-deal from the government as yet. In Bhagpat(UP) farmers opposed BJP MLA Yogesh Dhama with black flags and BJP Murdabad slogans , in Meerut (UP) too BJP MLA in Paswada, Kithor Assembly seat, faced the same black flags. In Udham Singh Nagar (Uttarakhand) farmers put-up their own camp on the site where BJP Minister Arvind Pandey was slated to arrive which made BJP to flee. 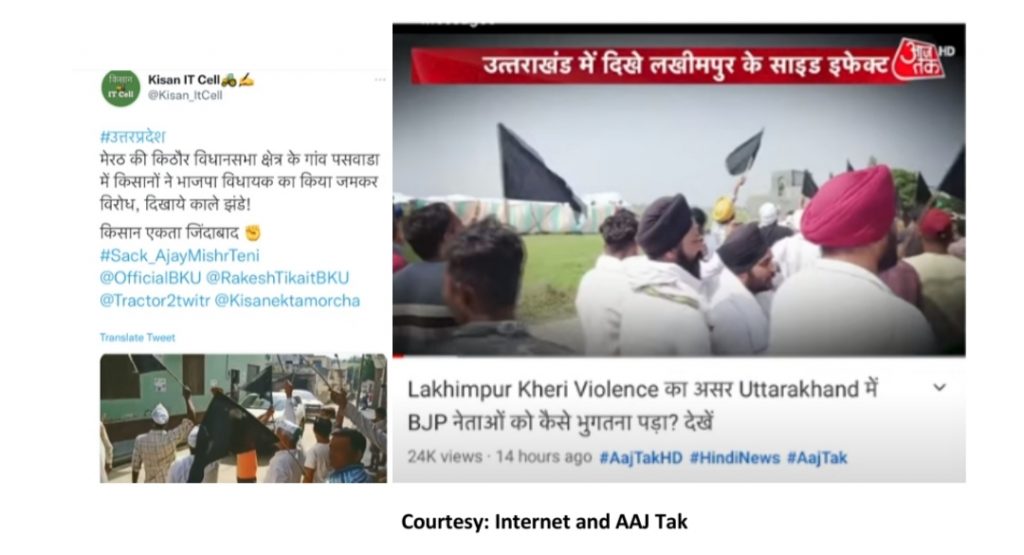 Farmers are also said to have announced to carry the ashes of the ‘four martyrs’ killed in Lakhimpur throughout the country. All the while as PM Narendra Modi is maintaining a deafening silence as has not uttered a single word since October 3, despite when he was in state capital Lucknow on October 6. One BJP training camp also got disrupted by farmers. This all shows that farmers are now to engage into what may be termed as a hot-pursuit of BJP. 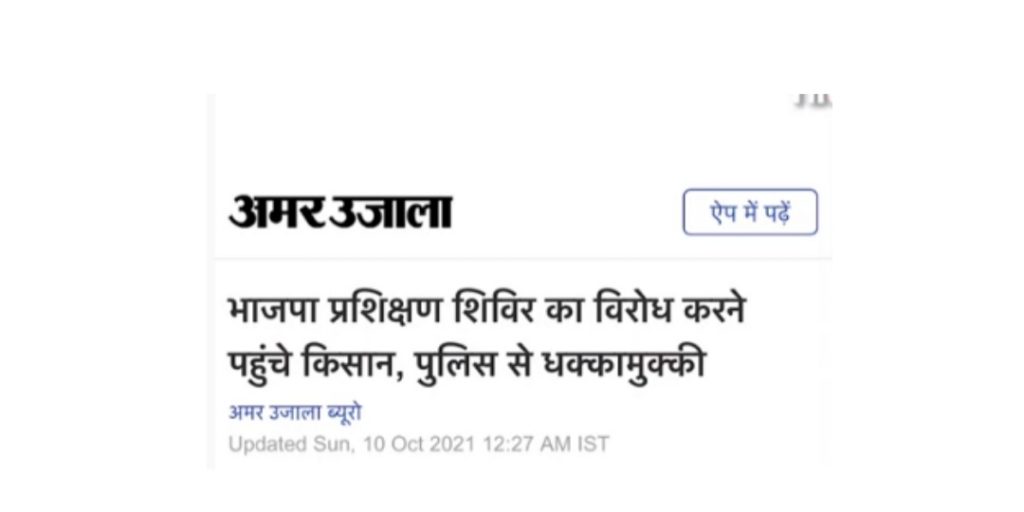 The anger of farmers is spilling-out on the streets as even BJP ministers are forced to make hasty-retreats. As if today the ominous words a Dushyant Chautala party MLA from Haryana Devinder Babli, are proving true, who had long contended that if the laws were not repealed it would force the ruling party and its allies to wear helmets and iron armour to enter their own constituencies . The prophecy is proving right.

UP government’s trigger-happy police has had a free lease since five years, the latest to face its wrath was the murder of Manish Gupta in Gorakhpur hotel, UP CM home turf, on September 27, where he was so brutally beaten that he died and all the six-policemen involved ran away. Now, two of them have been arrested. UP remembers well how Vivek Tiwari, an Apple company executive was shot dead in his car by police in 2018 in Lucknow. No wonder, people now are just waiting for the D-day when UP goes to polls in 2022, as the anger of people towards BJP is writ large.

BJP has failed on all its promises i.e. petrol prices ( now more than Rs 100 a liter), joblessness, external security vis a vis China etc and what to talk about the monumental havoc of deaths in the wake of COVID-19 second wave where the government could not even manage Oxygen to its exasperating citizens. Finally , the countdown to the next incumbent government, whose most potent alternative is SP Chief Akhilesh Yadav, is round the corner.