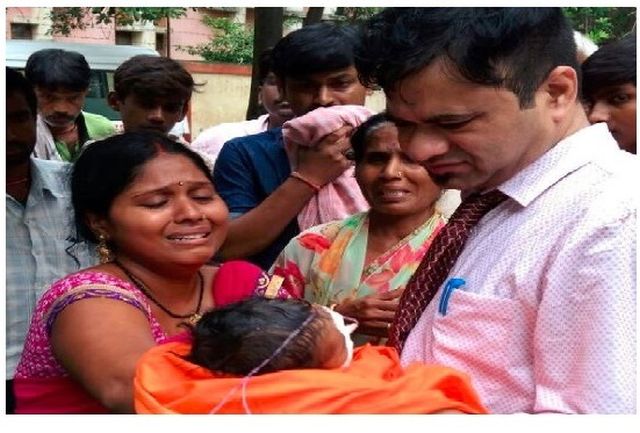 New Delhi: Humanity still prevails and Dr Kafeel Ahmad is its best example. When senior officials of the Uttar Pradesh Health Department were sleeping in their cosy rooms, this young doctor managed to get six oxygen cylinders using his contacts and resources to save many  lives at state-run Baba Raghav Das Medical College in Gorakhpur where 30 children died on the intervening night of Thursday and Friday of encephalitis after supply of liquid oxygen was possibly disrupted due to pending payment.

Dr Kafeel, who is a paediatrician and in-charge of encephalitis ward, was reportedly informed at around 2 am on Thursday that there is a shortage of liquid oxygen, which could be supplied to the ailing children only for one more hour.

He immediately rushed to a nursing home run by one of his friends and urged him to provide few oxygen cylinders. He managed to get three cylinders which he took to the hospital in his own car.

The disruption could somehow be controlled till the wee hours of Friday. As the limited oxygen supply of oxygen started finishing, the horror returned once again. The doctor called his superior but none of them allegedly picked up the call.

Dr Kafeel once again went to his doctor friend for help and managed to get six more oxygen cylinders. Meanwhile, he also reportedly spoke to six major oxygen supplier of the town. Everyone asked for cash payment.

Without wasting time, he reportedly gave his ATM card to an employee of the hospital to get cash. He got 12 cylinders refilled from a private supplier whom he had to pay against cash. He also paid a truck driver from his own pocket.

When the oxygen supply finally stopped at 7 am on Friday, Dr Kafeel along with his team of junior doctors tried their best to ensure patients and their caretakers remain calm.

Various reports suggest that around 60 children have died in the hospital in the past one week.

As the tragedy hit headlines, the UP government has set up a magisterial probe to find the exact reason of the deaths. The state government is facing the heat from Opposition parties and other outlets since Gorakhpur falls under Chief Minister Yogi Adityanath’s constituency.