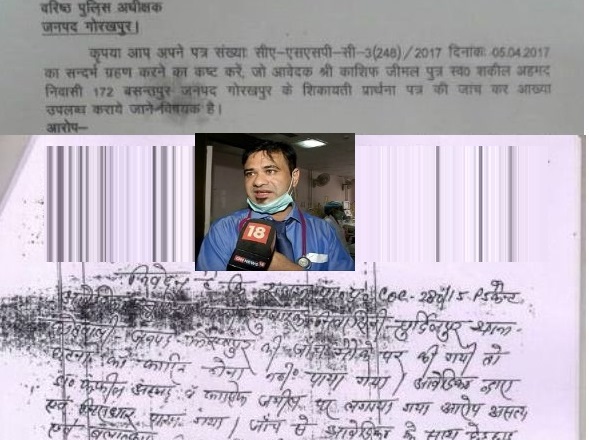 New Delhi/Lucknow: Dr. Kafeel Khan – a nodal officer of the of paediatric department at Gorakhpur’s Baba Raghav Das Medical College’s Hospital who was sacked following the deaths of 30 children within a span of 48 hours – is not a rapist.

The closure report filed in the case by the police clearly states that the allegation of rape levelled against the doctor, who has been hailed as ‘saviour’ of lives of many children while the state-run hospital was running out of oxygen supply, has been found “untrue”. The complaint was registered with women police station in Gorakhpur on November 25, 2015.

“It appears that the complainant on the persuasion of some other person fabricated a false story and filed the complaint which is false and baseless,” the investigator said in his report (dated April 3, 2015). MuslimMirror,com is in exclusive possession of the closure report.

She wrote this while re-tweeting a tweet by journalist Barkha Dutt who had written on microblogging website, “Kafeel Khan. A patriot. A human being. A hero.” (sic)

Bollywood actor-turned-politician Paresh Rawal, who is a BJP lawmaker, took no time to declare the doctor a rapist. Re-tweeting Kapoor’s tweet, he wrote, “Yes but Hero in the eyes of ever active Termite Clan !” (sic)

Dr Kafeel not only borrowed oxygen cylinders from his friends nursing homes to save the lives of children but also gave his ATM card to withdraw Rs 10,000 to a staff when he came to know that a local supplier was ready to provide oxygen cylinders.

He managed to save many lives and the parents in the hospital had said that had it not been for Khan’s work, the number of deaths in the past 48 hours would be more.

But soon after Chief Minister Yogi Adityanath and Union Health Minister J P Nadda visited the Gorakhpur hospital after the tragic incident hit headlines, the doctor who went extra miles in performing his duty removed from his post of nodal officer at the paediatric department on Sunday.

According to a Hindustan Times report , Khan was sacked for “dereliction of duty” and “carrying out private practice” while employed with the BRD hospital.

Dr Bhupendra Sharma will now take over as the nodal officer of pediatric department, while Dr P K Singh, principal of Rajkiya Medical College, Ambedkar Nagar, has been given additional charge of BRD Medical College.

Meanwhile, the sacking of paediatrician Dr Kafeel Khan has been condemned on Monday by resident doctors at All India Institute of Medical Science (AIIMS) who alleged that he had been made a “scapegoat”.

“With great pain we have to say that once again a doctor has been made a scapegoat for the infrastructural lapse and failure of the government,” said Dr Harjit Singh Bhatti, president of the resident doctors association at AIIMS, accusing the Uttar Pradesh government of “gross neglect of public health”.

What we don’t know about Dr Kafeel Khan

1. He was a nodal officer and is a lecturer at the paediatrics department. He was neither head of the department (HoD), nor the vice principal.

2. Pushpa Sales, the Lucknow-based company that supplies oxygen cylinders to the medical college, had written a letter to the Principal on August 1 which was sent to the DG Medical Education on August 4. No letter was shot off by the supplier to Dr Kafeel.

3. It is the responsibility of the maintenance department, which is head by Dr Satish Kumar – who also heads the department of anaesthesia – to monitor the oxygen supply.

4. Dr Kafeel was in the warmer procurement committee of the medical college. Not a single warmer was purchased during his tenure. And therefore, the allegation of corruption is baseless.