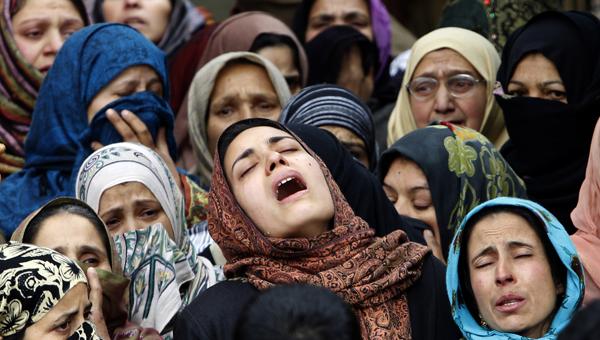 Srinagar:  Independent MLA and Awami Itehad Party leader Er Rasheed hit out the Center and the media accusing New Delhi of showing no concern to the loss of life in Kashmir as it was more concern for Amarnath yatries and Kashmiri Pandits.  In a strongly worded-statement on Wednesday,   he also asked India to stop lying with the world community about the happenings in streets of Kashmir.

Er Rasheed said that New Delhi starts talking about Kashmir only when situation takes ugly turn but once things return to so-called normalcy; it forgets all the things as nothing has happened there.

The lawmaker said, “While from US State Department to UN Secretary General everybody is showing its concern and urging for peaceful resolution of the Kashmir dispute, New Delhi is busy in finding excuses to justify its terror on streets of Kashmir. It is unfortunate that not only PM Narendra  Modi but all political parties including Congress, are running away from the problem and are not only trying to present J&K issue as a law and order problem but are busy in scoring political points over each other. However they know better, whether it is armed struggle of 1989, Amarnath land row of 2008, situation after the rape and murder of Aasia and Neelofar in 2009, unrest of 2010 or now the killing of Burhan Wani and other incidents from time to time, all these incidents do just act like triggers to give an outburst to the anti-India and pro-Aazadi sentiments among masses. Rather blaming Pakistan, India should understand that world community doesn’t need India’s or Pakistan’s permission to speak for the sufferings of Kashmiri people and sooner or later world community will have to force and facilitate a peaceful settlement. ”

He also said that Indian leaders have lost moral ground to appeal for calm in Kashmir, as they have not been only running away from UN Resolutions but have used Shimla and Tashkent Agreements always to buy time and bury the real issue.

Er Rasheed said, “Before discussing Kashmir in closed door, power corridors, India should tender unconditional and sincere apology to Kashmiri people for eroding the very basics of conditional Instrument of Accession, creating a record in making false promises to resolve dispute, adding salt to the injuries of Kashmiris by appointing interlocutors in 2010, establishing Kashmir committees and opening various retail shops to weaken the justified resistance movement of Kashmiris. New Delhi has not only humiliated the Separatists from time to time in the name of dialogue but has reduced the so called mainstream political parties to the level of casual labourers. Mainstream politicians have lost their credibility as New Delhi has used them like tissue papers from time to time. Despite the fact that Kashmiris have maintained communal harmony under worst circumstances, New Delhi has exposed yet its hatred towards Kashmiris by showing more concern to Amaranth yatries and Kashmiri Pandits rather caring about precious loss of lives. Unless national level political parties don’t understand the significance of resolution of Kashmir issue, situation will continue to be like a volcano and not only Kashmiris but India itself will also get sleepless nights.”

Er Rasheed lashed out at Indian media and accused them of misleading the country and destroying the facts vis-a-vis Kashmir. He added that the media trials of whatsoever is happening in Kashmir may intensify the race between many TV Channels of being more loyal to so-called national interest but it is definitely creating more hatred towards Indian state, its institutions and the media among Kashmiri masses.