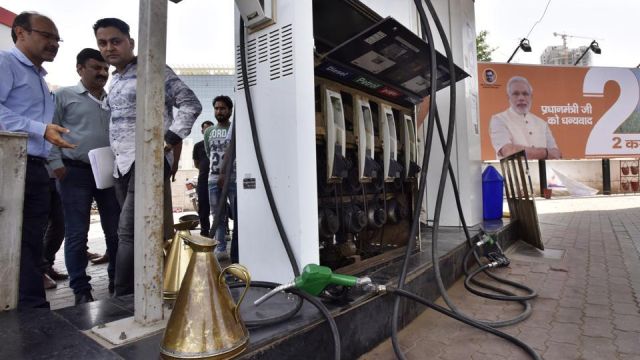 New Delhi : With opposition parties mocking the one paisa cut in the prices of petroleum products, Petroleum Minister Dharmendra Pradhan on Wednesday said the prices are decided by the oil companies and the government has no role in it.

“Petrol prices were connected to the market a few years back and daily pricing was brought in a year back. The government does not fix the price.

“The government used to monitor the price when it used to give out subsidy but today the oil companies are free to decide their price as per the international market. The government has no role in monitoring the price apart from the policy framework,” he said.

Earlier in the day, Indian Oil Corporation (IOC) reduced the prices of petrol and diesel by one paisa after accidentally showing a fall of 50-60 paisa per litre due to a “technical glitch”. The minor reduction came after a daily hike for the last 16 days totalling to Rs 4 per litre.

The Congress slammed the government for “playing a cruel joke” on the people.

“Dear Prime Minister, you have cut the price of petrol and diesel today by 1 paisa. One paisa!?? If this is your idea of a prank, it is childish and in poor taste. PS: A One paisa cut is not a suitable response to the #FuelChallenge I threw you last week,” tweeted Congress chief Rahul Gandhi.

However, Pradhan said oil is an international commodity and its prices are determined by several factors like quantum of oil production, international market and politics, oil companies and the taxes levied by the Centre and states.

“I have said this (oil) is an international commodity. The price has increased because of a fight between Iran and America, America’s sanction on Iran and Venezuela crisis. We need to keep in mind international diplomatic challenges when we think about energy security,” he said.

Noting both Central and state governments have responsibilities for welfare, he said: “Of the entire money that the Central government collects, 42 per cent is given to the states as per 14th Finance Commission. Of the balance, 60 to 70 per cent goes back through Centrally sponsored schemes. Development of the states is a priority issue.”

On Kerala declaring a price cut of Re 1 per litre of petrol and diesel from Friday forgoing the amount from its tax portion, Pradhan said the state is one of the largest tax collectors.

Other states should try to reduce fuel prices but each state has their limitations and priorities, he said.