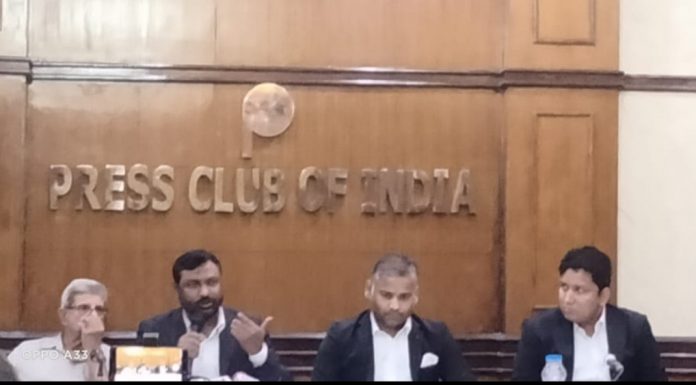 Tripura Police have booked two lawyers, who alleged that Muslims were targeted in the violence in October, under the Unlawful Activities (Prevention) Act on November 4. The cases have been registered at West Agartala Police Station.

The lawyers booked under the UAPA are Ansar Indori, a lawyer at the Supreme Court of India and member of the National Confederation of Human Rights Organizations (NCHRO), an alamgum of various human rights groups and Mukesh, another lawyer at the Delhi High Court.

Other charges registered under IPC are Sections 153-A and B (Promoting enmity between different groups on grounds of religion, race, place of birth, residence, language, etc), 469 (forgery for purpose of harming information), 503 (criminal intimidation), 504 ( (intentional insult with intent to provoke the breach of peace) and 120B (punishment for criminal conspiracy) of the Indian Penal Code.

The group of laywers on behalf of People’s Union for Civil Liberties (PUCL) had released a fact finding report on the violence which said that that Muslims were attacked at several places across the state and 12 mosques were ransacked and damaged.

The lawyers see the stringent UAPA charges as vendetta.

Ansar Indori called these charges government’s attempt to “draw the curtains on various things”.
“The government wanted to hide things from the public and we brought them to the light… they’re doing it because of frustration,” Indori said.

Indori said that the lawyers were expecting a case or two against them but invoking of the UAPA was unforeseen.

“We were surprised to know that we’ve been booked under this stringent law,” Indori said. “The government is trying to kill dissent”.
The Tripura Police has filed five criminal cases against 71 people over allegedly provocative and fake posts on social media.

A senior Tripura police officer told PTI that the cases were filed for allegedly spreading rumours on social media, related to the recent anti-Muslim incidents in Tripura. He also said that as per the preliminary probe, fake pictures and videos were uploaded on social media purportedly in a bid to tarnish the image of the government and the state police.

5 criminal cases has been registered against 71 persons who posted provocative posts on social media. Strict action shall be taken against those persons who are trying to create hatred in the society.

In October, protests were held at 51 places in Tripura over incidents of attacks on Hindu minorities in Bangladesh.

As many as 12 Mosques were vandalized and copies of Quran were burnt when rioters fired at a Masjid in Panisagar of North Tripura, according to the SC lawyer’s report. The violence followed VHP rallies in the state.

The Tripura High Court had taken suo motu cognisance of the case and sought a report on the violence from the state government.