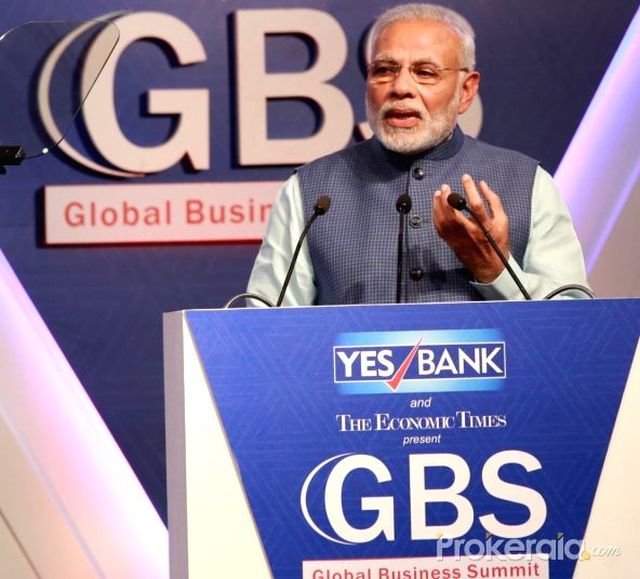 New Delhi : Breaking his silence over the massive PNB scam, Prime Minister Narendra Modi on Friday said that the government will take strong action against those indulging in financial irregularities and asked supervisory agencies responsible to do their job to prevent such frauds.

He also warned that his government will not tolerate embezzlement of public money.

“Those entrusted with the responsibility of ensuring rules and ethics in various financial institutions, should work with full dedication – especially those who are responsible for supervising and monitoring,” Modi said while addressing a gathering at Economic Times Global Business Summit.

He made it clear that the government would take strict action against irregularities in financial matters.

“The illegal accumulation of people”s money is unacceptable, and this is the basic mantra of New Economy-New Rules,” he said.

Noting that the Union Government is going to complete four years of assuming office in a few months, he said that a definite change is now visible.

“This change in the economic and social content, represents the essence of the New Rules for the New India and the New Economy,” the Prime Minister said.

He said that in the last four years, the discourse has changed from India being a ‘fragile five’ economy to the target of India becoming a ‘five trillion dollar’ economy.

Presenting figures to indicate how India is playing a key role in the entire world’s growth, he said that in nominal terms, India’s share of the world GDP has risen from 2.4 per cent in 2013, to 3.1 per cent in 2017.

“India is performing better on various macro-economic parameters,” he said.

Modi said that this change has come about due to a new approach and a new work culture. “India’s competitiveness is being validated by the entire world today.”

Recalling that when he had last attended this Global Business Summit, GST was still just a possibility, he said: “Today it is a reality, which has delivered a better tax compliance system and a better revenue system.” He also mentioned other major reforms such as the Insolvency and Bankruptcy Code.

Giving examples of the increase in pace in the various projects in infrastructure sector, he said that speed, scale and sensitivity are important to ensure the success of the government’s initiatives.

“There is unprecedented investment being made today in infrastructure, agriculture, technology, health sector and education sector,” he said mentioning the initiatives taken in the health sector, such as Mission Indradhanush, Jan Aushadhi Stores, and the Ayushman Bharat scheme.

About the Digital India Mission, Modi said that the trinity of 100 crore bank accounts, 100 crore Aadhaar cards and 100 crore mobile phones, would create a unique ecosystem, not seen anywhere else in the world.

Recalling that in his last address at the Economic Times Global Business Summit, he had spoken of Housing for All, Power for All, Clean Cooking for All, Health for All,and Insurance for All, he now outlined the steps that have been taken in regard to house construction, Ssaubhagya yojana, Ujjwala Yojana, and insurance.

Saying that the government’s initiatives are aimed at empowering the poor, the Prime Minister also mentioned the construction of toilets, distribution of loans through the Mudra Yojana and distribution of soil health cards.