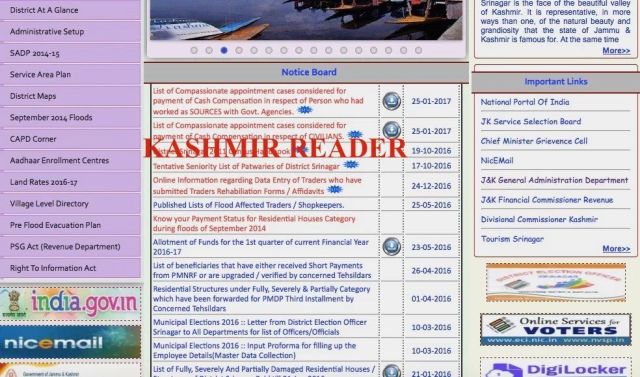 Srinagar: For the first time in the 28-year-old anti-India insurgency, the government made public a list of informers who had been killed by militants in Kashmir.

The list of 28 deceased informers has their names, residential addresses, the names of the next of their kin and the compensation sanctioned to their families.

The list, a copy of which is in possession of Kashmir Reader, said Rs 4 lakh have been cleared for the families of slain “sources”.

“List of compassionate appointment cases considered for payment of cash compensation @ Rs 4 lacs each in respect of person who had worked as sources with government agencies,” read the document updated on the website of Srinagar deputy commissioner on 25 January 2017.

The government has a policy of granting cash of Rs 4 lakh or a job to the immediate family member of civilians killed during militancy.

Only civilians are entitled to the compensation, not militants or their sympathisers.

The list includes the name of an informer who was killed in 1996 and the latest in 2006.

An investigation carried by Kashmir Reader revealed that several of slain informers had militant background.

Before their killings, militant outfits had warned them by dropping threat letters at their homes. But their families doubted those letters and passed them as part of “infighting” or “jealously”.

In the eyes of their families, their children were diehard freedom fighters who had rebelled against the state. Even after receiving compensation many families still hold on to this belief.

In one such case (identity withheld), a former militant was killed after Hizbul Mujahideen had warned him of dire consequences in case he does not mend his ways.

“But we did not panic because he was himself a Hizb militant and had served a jail term. Later, he was killed by some unknown men in his neighbourhood,” said the family members of the deceased.

A source, informer or mukbhir (Kashmiri for informer) is one who clandestinely works for the security establishment and tips the forces off about the presence of militants. In lieu of information, they are paid huge trance of cash depending on the category of militants killed.

The cash-for-information strategy is as old as the militancy and has paid dividends for the state in crushing militancy in Kashmir. In 2006, when the valley saw spike in grenade attacks, including one on a tourist vehicle, the police announced a reward of Rs 1 lakh and a government job for apprehending grenade throwers. Such strategies according to security officials have brought desired results in anti-militancy operations.

“They (sources) are our eyes and ears. It is a challenging task to work without them,” an official said.

Each militant carries a bounty on his head as per classification and police segregates militants into categories.

The top ranking A++ militant carries a reward of Rs 12 lakh on his head whereas A-category militants carries Rs 5 lakh, B-category Rs 3 lakh and the C-category Rs 2 lakh on their head. A lion’s share of the kill money goes into the kitty of an informant.

The dividend cash-for-information pays prompted the National Investigation Agency to circulate handbills announcing bounties for militants including slain Lashkar commander Abu Qasim alias Abdur Rehman for their involvement in 2015 Udhampur attack. The agency had promised anonymity of sources in the poster and it was learnt confidentiality and trust is always guaranteed to informants. “You can’t expose their names. They are assets to any state. Similarly, we too have cultivated them,” said a police official.

Legally, however, informants cannot claim damage for any harm this shadowy trade can bring to them. “They have no legal status. But their families are taken care of,” the official said.

This trade of information gathering is so murky that it can invite trouble anytime not only to informants but also to their handlers.

During several investigations, it had been noted that the informer was playing mischief by actually leaking information to the other side. Sometimes informers “mislead” the forces for their vested interests as happened in the killing of a Bandipora youth in 2013. The informer had tipped the army off about the presence of militants but instead an 18-year-old, Irfan Ahmad, was killed.

During the past 28 years, hundreds of Kashmiris accused of being informers fell to the bullets of militants.

In 2011, two teenaged sisters of Sopore, accused of being informers, were killed by Lashkar-e-Toiba outfit. That time a word went around that the duo was on the payrolls of the forces, as the girls were seen moving around their neighbourhood after dusk and talking on their cell phones. However, United Jihad Council had condemned their killing.

Amid the sword of Damocles hanging over informants’ head, it is an uphill task for them to collect information and pass it on to the forces.

A strong network of informers has drastically reduced the active age of militants in the valley. That is why militant outfits often threaten informers of dire consequences.

As recently as December 2016, Hizbul Mujahideen commander Zakir, who replaced iconic Burhan Wani, warned of action against informers. He claimed “having access to informer database.”

“Threats have an impact on informers. The information gathering is quite a sensitive and challenging assignment,” a police officer said, adding “We can’t own an informer after he is killed as it can endanger a family. Also, being informer in Kashmir has no social acceptance. So we avoid owing them”.