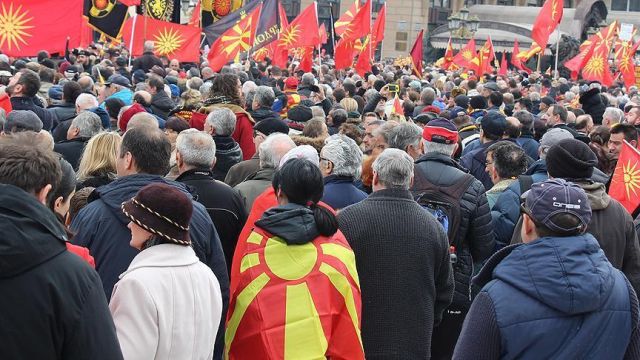 Geneva: Macedonian non-governmental organizations are protesting ongoing talks on the name of their country, accusing Greece of committing “human rights violations as well as crimes against humanity, war crimes and genocide” against its Macedonian minority since 1913.

In a joint statement Tuesday to Anadolu Agency, Macedonian Human Rights Movement International, the United Macedonian Diaspora, the World Macedonian Congress and the Macedonian Global Coordinative Network slammed Greece and global organizations over the decades-old dispute between Athens and Skopje over the former Yugoslav republic’s name.

The statement — issued by their joint branch office in Geneva — said the Macedonian people can no longer bear the intolerable burden of injustice inflicted upon them by Greece, the United Nations, the European Union and NATO through the ongoing “talks” on the name of their country, which began in 1993.

“What started out as a discussion to “settle” a supposed difference has become 25 years later an attempt to commit a genocide on the Macedonian people – to erase them, their country, their language and their history from the books and maps of the world,” they said.

The NGOs said Macedonians are shockingly being forced by the European Union and NATO to negotiate their name, their ethnic and national identity, their language and their history as a pre-condition for membership in these international and regional organizations.

“This is the first time in the history of mankind that such internationally orchestrated pressure is being exerted on an entire people to self-destruct — pressure inflicted by the nations and organizations that were supposed to be the gatekeepers of human rights in the 21st century,” the statement said.

The NGOs said the name issue is the Greek government’s invention and is merely the continuation and internationalization of its century-old domestic policy of denial of the ethnic identity of its Macedonian minority.

They called for the establishment of an independent commission of inquiry to look into the human rights violations as well as crimes against humanity, war crimes and genocide committed against the Macedonian minority in Greece since 1913.

“The Greek government must deal with its past and once and for all publicly recognize and apologize for the crimes against humanity, war crimes and genocide it committed upon the Macedonian minority in Greece since 1913,” the statement added.

The debate about Macedonia’s name has been ongoing for more than 25 years. Athens does not want its neighbor to have the name Macedonia because of the existence of a region in Greece with the same name.

It currently recognizes Macedonia as the Former Yugoslav Republic of Macedonia (FYROM), the name Macedonia used to enter the UN in 1993.

The dispute has been one of the main obstacles for Macedonia’s ambitions to join NATO and the EU due to the veto right of Greece.

Despite the dispute between Athens and Skopje, many countries, including Turkey, recognize Macedonia with its present name.

Türkiye has no desire to go to war with Greece: President Erdogan