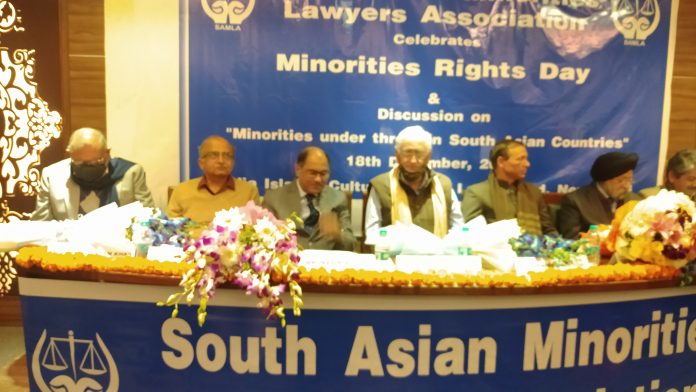 New Delhi: At a symposium on “Minorities under Threat in South Asian Countries” on Saturday, prominent jurists, lawyers and intellectuals expressed deep concern over the ongoing treatment and persecution of minorities in South Asian countries particularly in India. The event was organized by the South Asian Minorities Lawyers Association (SAMLA) to commemorate the UN declared International Day for the Rights of Minorities.

Speaking at the event, distinguished lawyer and former law and justice Minister Salman Khurshid said for the greed and lust of power the country has been pushed into communal cauldron which may seriously hurt the unity and integrity of the country. Without taking the name of the ruling party, he warned that those who want to change the constitution should think twice that there cannot be two separate laws in the country for one act.

The former union minister lament the current sorry state of affairs of the country advising that we must speak out against anyone who is mistreated and persecuted. “There will be no savior if we do not act,” he declared, invoking a Nazi German poet. Without naming the ruling party, he remarked that those who do not recognise the constitution and wish to amend it have no idea that how a country can have two separate laws for same act.

In his key note address, Dr. Zafar-ul-Islam Khan, former Chairman Delhi Minorities Commission, discussed the evolution of minority rights and provided a comprehensive overview of minorities’ position in SAARC countries. Every country in the region’s majority group, he claims, wants its minority to adopt its culture and religion. Bhutanese, Sri Lankan, Pakistani, Afghan, Bangladeshi, Burmese, and Indian minorities confront challenges. The governments of Pakistan and Bangladesh, on the other hand, have taken a positive stance on this issue. He claimed that SAARC has not become effective and efficient as a result of tensions between Pakistan and India.

Eminent lawyer Prashan Bhushan , who was conferred upon SAMLA Social Harmony Award for the year 2021, said minorities were undoubtedly targeted, and the BJP’s IT cell and god media were at the vanguard of the push to make them suspicious in the eyes of the countrymen. He said there was no need to be upset with the situation. We must continue to speak out against it. He proposed establishing harmony council at Mohilla level in every town and said the tide is turning against the fascist forces in the country.

Another awarded of the Social Harmony Award, Additional Solicitor General R.S. Sure also suggested that we should increase our interaction so that we can get to know each other better and clear up misunderstandings. Referring to the Sikh pogrom of 1984, he said that I also belong to a minority community and that is why I know what is happening to minorities in this country. He lamented that despite the teaching of equality, the caste system among Muslims and Sikhs remained.

Leading lawyer Ashok Aurora proposed the formation of a pressure group to preserve minorities’ rights. He claimed that the Qur’an teaches us to exalt ourselves and that we should obey it.

According to Zakir Khan, chairman of the Delhi Minorities Commission, Muslims are falling behind in schooling due to their economic hardship.

Commenting on the formation of SAMLA, Secretary General of Samla Feroz Khan Ghazi said that SAARC was formed in 1985 but it could not become active. “SAMLA is an association of lawyers committed to promotion and protection of rights of minorities in South Asia. SAMLA believes that protection of minorities’ rights is necessary to attain peace and prosperity in the region”, he said.

Ghazi noted that in South Asian countries, the minority in one country is the majority in the other, as in the case of the Hindu minority in Bangladesh and Pakistan, and that the situation is entirely different in the Muslim majority and in India.

According to Ghazi, in order to advance awareness about the need to realize rights of minorities in the South Asian region South Asian Minorities Lawyers Association (SAMLA) instituted SAMLA Social Harmony Awards.

The Awards are conferred annually on two personalities or institutions, one from minorities and another from majority community, who have made significant contribution for protection of rights of minorities and promotion of social harmony in the region.

He underlined that no country could achieve peace and development without taking care of its minority.

It is recalled that the General Assembly of the United Nation Organization adopted Declaration on the Rights of Persons Belonging to National or Ethnic, Religious and Linguistic Minorities on 18 December 1992 and since then, December 18 is commemorated as Minorities Rights Day world over. Article 3 of this declaration guarantees persons belonging to minorities the right to exercise their rights individually and in community with others without discrimination.

Supreme Court Advocate Jaffery conducted the proceedings and Meraj Khan presented vote of thanks to audience and the guests.