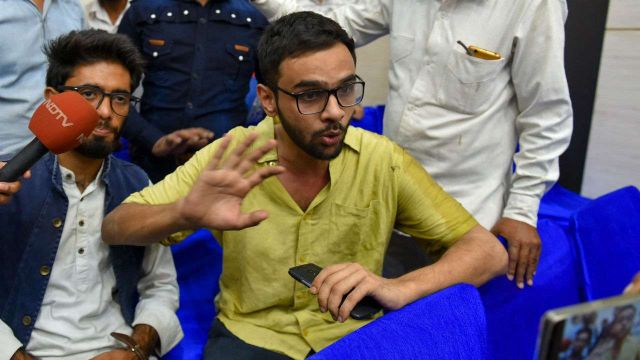 New Delhi : A day after he survived an attack on his life in the heart of the capital, JNU scholar Umar Khalid on Tuesday urged Prime Minister Narendra Modi to assure in his Independence Day speech that critics of the government won’t be targeted.

“Modiji, you had asked for suggestions for your IDay speech. I have a suggestion to make – can you please state that you guarantee that there will be no attack on those who criticize your government and its many failures,” Khalid said in a post on social media.

The Prime Minister has sought suggestions from citizens for his Independence Day speech.

In his post in response to Modi’s solicitation, the JNU scholar, who is fighting a legal battle since he was charged with sedition in 2016, said the attempted gun attack on his life on Monday was to “scare us into silence”.

“What does ‘freedom’ even mean if the citizens of this country have to be ready to die for their ‘crime’ of just being vocal against injustice.

“The fact that two days before Independence Day, in one of the most ‘high security’ zones of the national capital, an armed assailant could dare to attack me in broad daylight only goes onto show the brazen impunity that some people feel they enjoy under the present regime.”

He also said if something happened to him tomorrow, “then do not just hold that ‘unidentified gunman’ responsible”.

The real culprits, he said, were “those who from their seats of power have been breeding an atmosphere of hatred, of bloodlust and fear… Those who have provided an atmosphere of complete impunity for assassins and mob lynchers… those spokespersons of the ruling party (BJP) and the prime time anchors and TV channels who have spread canards about me”.

He said even after the police has registered an offence under Section 307 and Arms Act, saffron agents were trying to suggest that the attack never happened.

Khalid said the arrests made in the murder case of Gauri Lankesh exposed the hands of “Hindutva terror outfits”.

“Tomorrow while there will be once again a shower of high voltage lies and sugar-coated jumlas from the ramparts of Dalmia Group’s Red Fort, our fight for real freedom and dignity, and making the dreams of Bhagat Singh and Babasaheb Ambedkar into a reality will continue with greater resolve.”