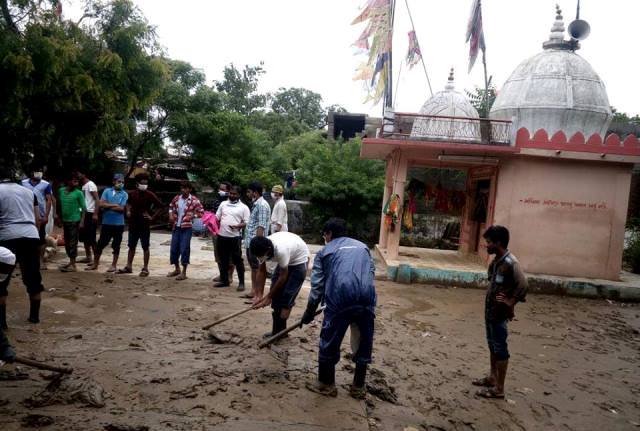 New Delhi: At a time when hate politics is on the rise, a flower of communal harmony has bloomed in the muck of flood-ravaged Dhanera in Banaskantha, a district which has lost 64 lives and is still counting its dead. In this Hindu-dominated town, some 3,500 Muslims from Dhanera, Deesa, Palanpur and nearby villages in to the aid of the town, cleaning places of worship and residence alike, after waters started receding slowly.

The town was submerged under 10 feet of flood water that coursed its way through thousands of homes, leaving behind a trail of destruction, tonnes of earth, sand and scare of an epidemic.

The volunteers of the Jamiat Ulama-i-Hind (JUH) cleaned some major temples in Dhanera such as the Ganapati, Hanuman, Satimata, Lilashah and Ashapura Mata temples in the first two days with the help of a few locals.

The prominent Muslim body has been actively engaged in relief works in the flood-affected areas of south Gujarat, which faced the worst natural calamity on July 24.

Hundreds of Muslim residents of the area have been engaged in cleanliness drive in Hindu and Muslim localities sending out a very positive message of communal amity.

Jamiat’s General Secretary Maulana Maulana Mahmood Madani, while lauding  the effort of local Jamiat volunteers expressed optimism that it will strengthen feeling of brotherhood and national unity. He said that this crowd has set example against the crowd which is infamous for mob lynching.