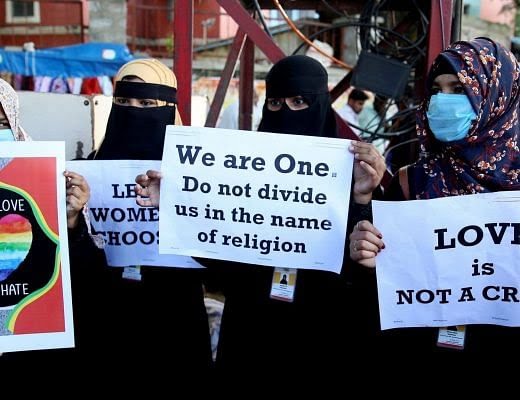 GANDHINAGAR:  The Gujarat High Court issued a notice to the state government during a hearing on a petition challenging the vires of the Gujarat Freedom of Religion (Amendment) Act, 2021, popularly known as ‘Love Jihad’, on the grounds that the law is in violation of constitutional rights, is manifestly arbitrary and violates the right to privacy.

The HC bench also asked the state counsel to interpret what was meant by conversion “by marriage” introduced in the amended act.

In the recent Budget Session, the state government had passed the Amendment Bill and was brought into effect from June 15 this year after getting the nod from the Governor.

This Amendment has been challenged by two petitions. One is moved by the Jamiat Ulama-i-Hind and Jamiat Ulama Welfare Trust and the other is moved by an Ahmedabad resident Mujahid Nafees.

Appearing for the Jamiat Ulama-i-Hind, senior advocate Mihir Joshi argued that conversion by marriage or by a person getting married has been made an offence and that it flies in the face of Article 21.

“An inter-religious marriage is never smooth, this act is essentially taking away the choice of two adults from different religions to get married. Marriage is not illegal in itself, which has been made an offence.”

Stating that while Article 25 of the Constitution guarantees freedom to propagate religion and that the unamended act made forcible or fraudulent conversions an offence, “the amendment goes far more than that… It has vague terms incorporated which affect your right to propagate (religion) and also the right to privacy essential to an individual, being that of marriage.” Joshi told the bench.

The petitioners have challenged the broader definition now of “allurement” which includes “better lifestyle, divine blessings or otherwise”, which has been termed as “vague” by the petitioners as the term ‘otherwise’ “could mean anything at all”, as was submitted by Joshi.

Chief Justice Nath, agreeing to the petitioners observation, remarked that sections 2(a) (i) and 2 (a) (ii), which defines allurement as offer of any temptation in the form of ‘any gift or gratification, either in cash or kind and grant of any material benefit, either monetary or otherwise’, already takes care of the aspect of “better lifestyle in itself”, which has now been introduced as an additional specific clause in the amended act instead and aspects of divine blessings would otherwise fall outside of the scope.

The bench has sought from the government pleader as to what is implied by the phrase of ‘by marriage’ as a condition under prohibition by forcible conversion.

“Whatever be the interpretation of your provision, we can say that two adults of two religions or an inter-religion alliance or marriage would not by itself constitute an offence, until and unless any of the ingredients of allurement, force, etc. are there… It is up to the married couple to decide which religion to follow,” the bench remarked.

“Either you say if there is marriage by force or fraudulent means and then there is conversion, then, of course, it is not right, fair enough…But if you say only because of marriage, someone converts and so it is an offence, it isn’t correct,” the Court observed.

Further, Justice Vaishnav said thus: “If somebody gets married to a person of different religion, you will first send him to jail and then check if the marriage was by use of force or not?.”

“Per se an inter-religion marriage, it can’t be an offence. Per se marriage doesn’t require conversion,” submitted the State Counsel, Manisha Luvkumar. “But, it is for the married couple to decide which religion to follow,” remarked the Court.

Shah has sought time to respond to the contentions, admitting that she had “not examined the Act in its totality.” The government counsel also opposed a stay on the operation of the Act.

Granting a feeling of security, the Chief Justice said, “If the state takes any action/sends to jail any person in case of inter-religion marriage, you come to us we will protect you.”

Issuing notice to the State Government, the High Court has posted the matter for hearing on August 17. As the state Act has been challenged, the HC also issued notice to the Advocate General as well. — IANS